Mossey ups the pace on final day in Almeria 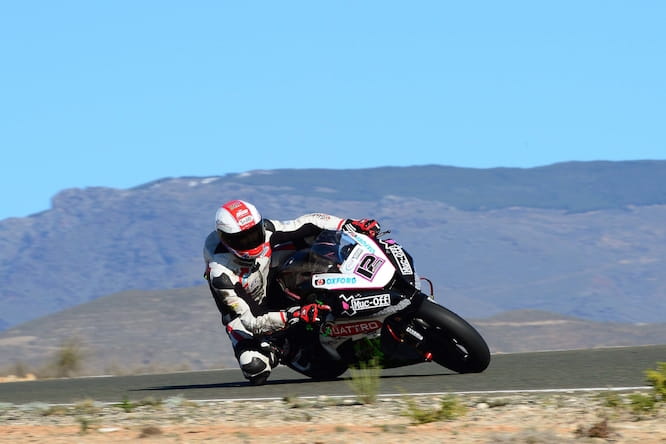 The 22-year-old posted a fastest time of 1’36.1 on his Quattro Plant Kawasaki ZX10-R, just 0.4 sec off Shane Byrne’s quickest this time last year.

The lap placed him ahead of double British Supersport champion Stuart Easton on the PBM Kawasaki by a whopping 0.844 seconds.

“We rode the bike for the first time a few weeks ago at Cartagena,” said Mossey, speaking to Bike Social in Almeria.

“It’s brilliant, absolutely fantastic. It’s got another 80 horsepower than a 600 so it’s obviously quite different! The team is doing a great job and I’m absolutely loving it.

“I’ve got Dan Linfoot’s crew and you can’t say he did a bad job last year. He was a rostrum man and got into the showdown so hopefully we can live up to that this year. I’m sure we can because the bike’s fantastic; the boys are doing a great job behind the scenes.” 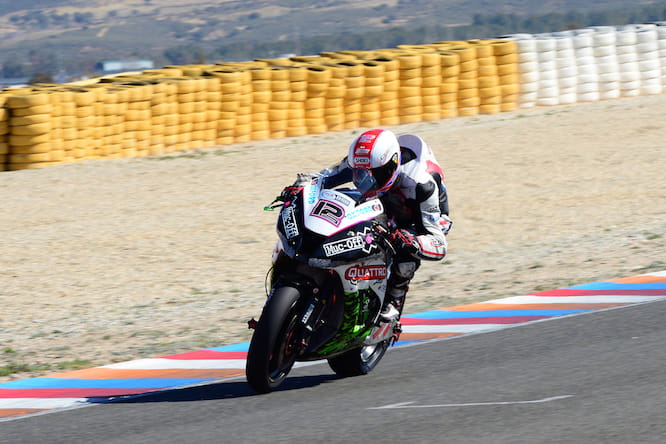 Focusing on learning the bike during the three day test, Mossey says he didn’t expect the laptimes to be as low.

“We’re just trying to ride the bike as much as we can and the lap times are coming at the same time which is obviously a bonus but we just want to keep learning and learning and hopefully we can hit the ground running at Donington.”

Despite having never ridden a superbike before this year, Mossey was faster than many more experienced rivals including fellow rookie Lee Jackson, who spent two years in the Superstock 1000 championship before making his superbike debut for Buildbase BMW in place of the injured James Westmoreland last season.

“Lee Jackson is fast, he’s ridden 1000s for the last two years and also did a few superbike wildcards last year,” Mossey continued. “Being fastest is just a bonus really, I didn’t want to put any expectations on myself or whatever but it’s nice to have had Shakey on track as right now he’s the man to beat. To be quicker than him on my first time riding a superbike at this track is mega, it’s a shame he’s not here today! Testing is different and I know it’ll be harder when we get to the first round but hopefully we can continue taking these babysteps and keep progressing and not doing anything stupid to knock ourselves back.”

Mossey’s Quattro Plant Kawasaki team now move on to Cartagena, where they’ll join a number of other teams, including GBmoto, Be Wiser, Halsall and PBM, for the first large scale British Superbike test of the season.