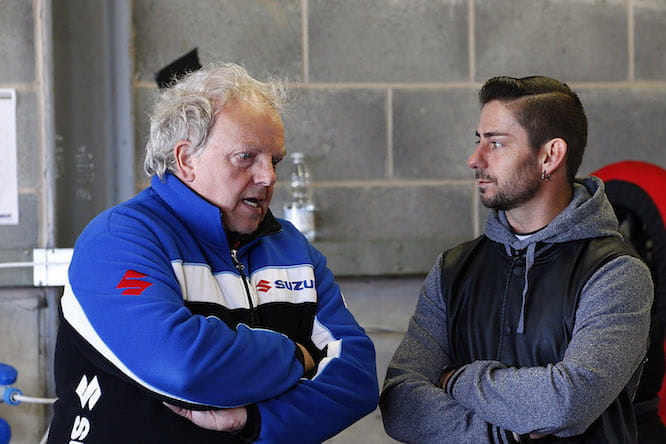 John Hopkins has said he is positive about joining the British Superbike grid by the second or third round after announcing his intentions to return to the championship on the eve of the final pre-season test.

Hopkins released a statement on Wednesday night saying he was looking to rejoin the series after a planned deal to ride for Toth BMW in World Superbikes fell through during the winter.

True to his word, Hopkins arrived at the final pre-season test at Donington Park on Thursday in search of a ride and sounds fairly confident about sorting one out, suggesting he could be on the grid as soon as the second round."

“I want to resurrect my career. 2014 was a disappointing, horrible season”, Hopkins told Bike Social at Donington. “Unfortunately the plans I had for this year in World Superbike fell through which forced me to take a step back and decide what I really want to do. After taking a look at it and really thinking about it I decided that I want to get back out there. I don’t want to stop racing, there’s no way I’m going to end my career like that.”

The Anglo-American suffered a tough season with the Tyco Suzuki team in 2014, often struggling to finish inside the top ten. He does have form in the British championship though, having missed out on the 2011 title to Tommy Hill by 0.006 seconds.

“Last year I struggled for a number of reasons but I’d rather not get into it,” he continued”It was a combination of things, we didn’t gel that well, it was just a difficult season but now it’s all about 2015 where we can hopefully improve.

“It’s just a matter of trying to get onto a bike now! I’ve had a bit of interest but obviously it’s hard now all the seats are taken. Hopefully it will turn into something positive.”

With the British Superbike grid full of new, top-spec machinery for 2015 there are some cracking bikes on the grid, but Hopkins accepts that his options are fairly limited.

“It’s hard to have much of a choice at the moment but if anything I’d love to get a chance on the Kawasaki. I think it’d suit my riding style quite well. That being said the brand new Yamaha looks like an amazing bike so I’d love an opportunity to ride that but right now I just want jump on any bike and see what I can do.

“I think the chances of us getting on the grid are pretty positive. It will be a stretch for Donington but for upcoming rounds I’m confident. I had a meeting with Stuart Higgs earlier and I’ve been impressed with the response I’ve had since I announced my intentions less than 24 hours ago. Stuart wants to make it happen so if anyone has a say in this championship it’s probably him!”