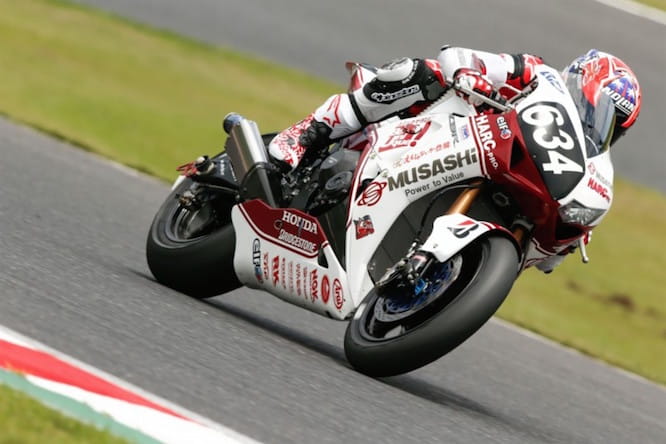 The crash which ruled Casey Stoner and the MuSASHi RT HARC-Pro team out of this year’s Suzuka 8 Hour race was caused by ‘mechanical troubles’, HRC have said.

The Aussie crashed out in a dramatic fashion early in his first stint on approach to the hairpin, breaking his right tibia and left scapular (shoulder blade).

Following the crash Stoner tweeted to say his throttle was stuck open, leaving him no choice but to lay the motorcycle down.

The team initially released a statement claiming Stoner went in too hot but later retracted this confirming that the crash was caused by ‘mechanical trouble’. They have since said that the throttle was 26 degrees open leading in to the crash.

“I am really disappointed that the Suzuka 8 Hour has ended like this,” said Stoner. “We have done a lot of work over the last few weeks to get accustomed to the bike and the track and work towards a setting that made all of us quite comfortable.

“We really felt that the race and everything had gone as we planned so far, we were very relaxed and comfortable and making sure we saved the tyres and fuel to stretch the stint as long as we could.

“Unfortunately we experienced some mechanical trouble as I was going through the corner leading up to the hairpin. I did not have enough time to engage the clutch and I came in with to much speed. I picked the bike up to try and slow down more but I was heading towards the wall so I decided to lay it over and hit the barrier but they were a lot harder than they looked and we came out of it with a broken bone in the ankle and broken scapular.

“I want to say thanks to my team mates Michael van der Mark and Takumi Takahashi – they have done a fantastic job over these weeks and this weekend especially. I’m sorry that we could not achieve the strong result I believe we could have.”