Double victory and championship lead for Brookes at Thruxton 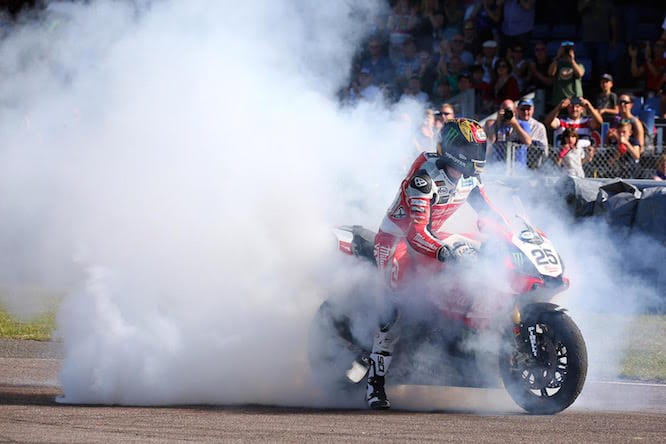 Josh Brookes continued his commanding form in the 2015 British Superbike championship at Thruxton this weekend, taking a dominant double victory for the second weekend in a row.

Having qualified on pole position Brookes made a rocketship start as the first race got underway but Ducati’s John Hopkins was eager to stop him building a gap.

The race was stopped after a handful of laps as Richard Cooper’s Anvil Hire TAG Kawasaki blew up and dumped oil on the circuit. James Ellison and Christian Iddon fell on the spillage. Iddon was able to make restart but Ellison wasn’t so lucky suffering a broken wrist in the incident.

On the restart Hopkins shot off the line on the Panigale but with the American unable to hold the pace Brookes was on him after just a couple of laps with Honda’s Dan Linfoot not far behind.

Hopkins’ good run was cut short as his exhaust snapped in the closing stages, meaning the five-rider scrap for fourth became a scrap for the final podium spot. 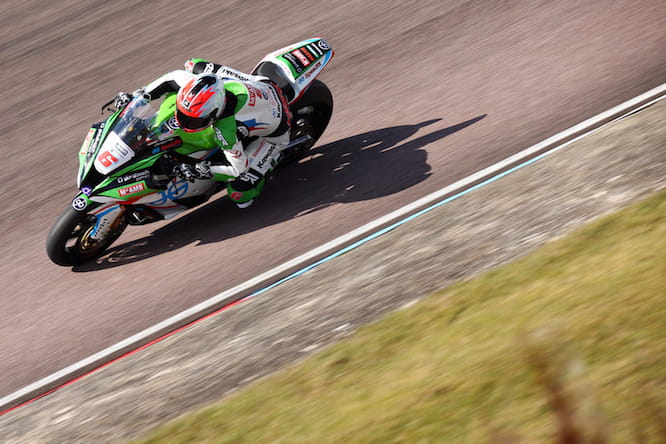 GBmoto’s James Westmoreland came out the better, taking his first ever BSB podium ahead of Shane Byrne, who started the race from 16th. Howie Mainwaring-Smart was fifth.

Luke Mossey took sixth ahead of Jack Kennedy on the WD40 kawasaki with the BMW’s of Billy McConnell, Michael Laverty and Martin Jessopp rounding out the top ten.

Brookes shot off the line at the start of race two to build three bike lengths from Hopkins in the first few corners. First race podium-man Dan Linfoot also made a strong start ahead of Shane Byrne in fourth.

Brookes had built a lead of almost six seconds when the safety car came out on lap 12 as a result Kennedy crashing out of a strong sixth place.

The Nissan GTR returned to the pits after three laps, leaving the riders to battle it out over a five-lap sprint.

Hopkins’ hope of taking the Panigale’s first podium of the season were dashed as he crashed out at the chicane with two to go leaving Byrne in second place with youngster Luke Mossey in hot pursuit.

The Teccare Quattro Plant Kawasaki rider tried his best to out-do the four-time champion on the final lap with a stunning move round the outside but Byrne soon came back to secure second place by two tenths of a second. 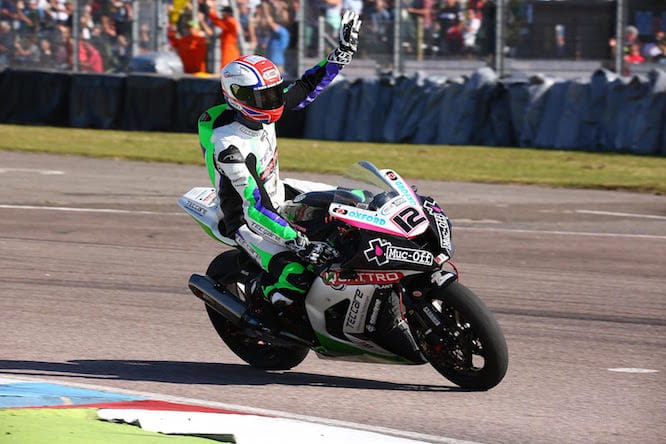 Tommy Bridewell took fourth from Dan Linfoot, who had held a strong third before the safety car, with the second Tyco BMW of Michael Laverty in sixth.

Lee Jackson enjoyed a strong ride to ninth place from the back of the grid ahead of Bennetts Suzuki man Josh Waters who completed the top ten.

Brookes second consecutive double moves him 12 points ahead of Byrne in the championship standings but the Aussie still trails his rival in podium credits.