Linfoot on Honda BSB test: "I've never had this much confidence" 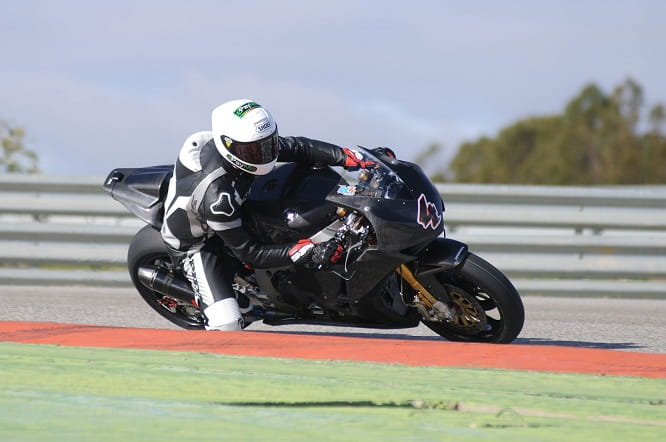 British Superbike rider Dan Linfoot says he has never had so much confidence ahead of a season following his first test with the Honda Racing team.

Linfoot spent four days testing at the Monteblanco circuit in Spain, alongside new teammate Jason O’Halloran, in order to get a feel for his new CBR1000RR Fireblade.

The Yorkshireman steps up to the factory Honda team after an impressive season in 2014 saw him finish fifth in the overall standings and second Kawasaki rider behind only champion Shane ‘Shakey’ Byrne’.

“To be honest I’ve never had this much confidence,” said Linfoot. “Knowing I’m with an ex-championship winning team is all the confidence you need really because you know what is underneath you is more than good enough to do the job. It’s down to me and how I communicate with my crew to get the best out of it.

“First impressions of the Honda were how sharp it is. Obviously it is a proven package already. In my first laps I found it to be quite a different riding position, the bike was a lot more on its nose, the engine was responsive, really linear with a nice smooth delivery but plenty of power.

Linfoot is no stranger to Honda’s CBR1000RR, he first rode one for SMT Honda in 2011 before a full season on GBmoto’s Fireblade in 2013. However these privateer machines will largely differ from the factory bike he’ll take on this year. The team is run directly out of Honda Racing’s workshop in Louth.

“The first thing that struck me compared to other Hondas I’ve ridden was the motor, in how powerful and how usable it is,” Linfoot explained. “The chassis has moved forward, these guys have got a new swing arm and tank that have a lot of benefit in terms of riding position. Other than that, it’s not too different. There isn’t a world of difference in going left to right on my GBmoto Honda and going from left to right on this bike, but if you compare it to other bikes I’ve ridden, the Honda was much more agile.

“It’s quite different being in a factory team; it’s very professional in comparison to some of the team’s I’ve worked with in the past. Everything is noted down, we have detailed debriefs and I like that. It’s definitely the best way to get the most out of both rider and crew chief so we can improve the job next time out.”

While the UK was suffering freezing temperatures and snowstorms, the weather played ball in southern Spain and the team were able to make use of a solid four day’s testing with just one of those interrupted by rain.

“We weren’t chasing lap times, it wasn’t a case of go as fast as you can go,” he continued. “The first day was about getting settled on the bike, the second day was working on some chassis stuff and tailoring the bike a little bit more, third day was written off with rain and the bulk of the work was done on the fourth day. It was all ride height, fork-springs, balancing to get the bike how I like it. I started to understand how the bike reacts when the fuel load goes down too.

Honda will return to Monteblanco next month, where Linfoot and teammate O’Halloran will be joined for the first time by Honda’s latest signing Jenny Tinmouth. Official British Superbike testing kicks off mid-March in Almeria before a UK test at Donington Park on March 25th.