Kiyonari bags pole ahead of Ellison and Byrne 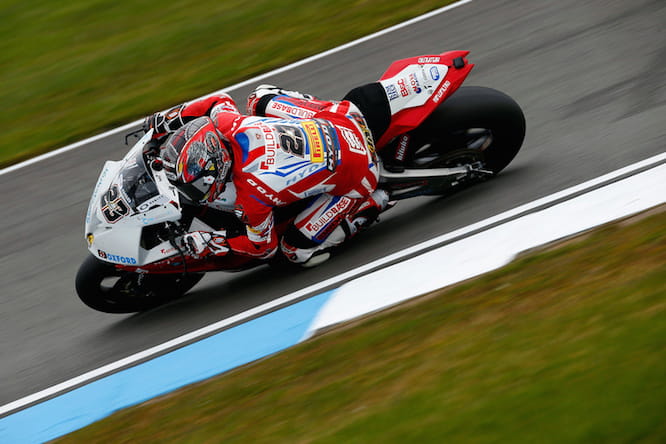 With large grid this year, British Superbike bosses have enforced a new rule which allows just the top 30 riders from free practice to progress to the three-stage qualifying shoot out. The first big-named casualty of the new cut-off was Jakub Smrz, who crashed heavily at the Craner curves in the first practice session ruling him out of any further practice action.

A number of riders bit the dust as they put the hammer down for the first time this season in Q1, including Broc Parkes and Lee Jackson who crashed out in the opening minutes. Parkes remounted and returned to the pits, as allowed under a new regulation permitting marshals to decide whether a bike is fit to return to the track after an incident. Jackson’s bike was also taken back to the garage, with both riders back out before the end of the session. Victor Cox on the other hand wasn’t so lucky, a heavy crash for the MotoDex BMW rider at Goddards saw the red flag brought out.

With a second covering the top ten, the second session was super-close and left a number of championship contenders out of the mix. The first shock was Tyco BMW’s duo of Michael Laverty and Tommy Bridewell not making it through to the final session, nor did either of the Bennetts Suzuki riders or Chris Walker on the BeWiser Kawasaki.

Having topped Q2, Ellison looked strong into the final session as he went out on his second softer Pirelli. The Cumbrian broke the circuit lap record to lead the session until two minutes remaining, when Kiyonari pipped him by just 0.029secs. Shane Byrne completes the front row.

Brookes leads the second row ahead of Stuart Easton and Danny Buchan, with Peter Hickman, Brock Parkes and Dan Linfoot on row three.