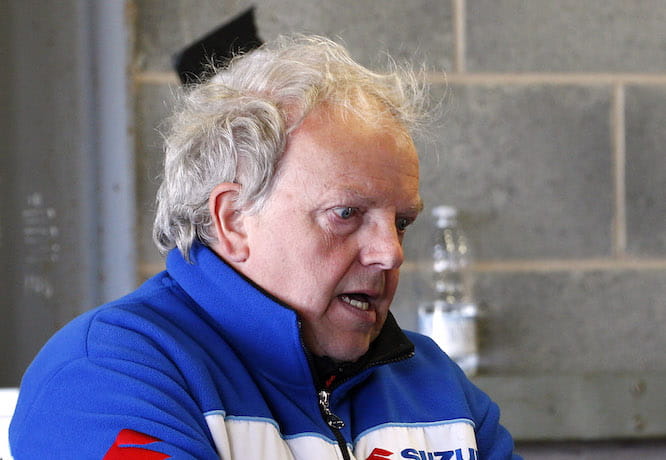 Bennetts Suzuki boss, Jack Valentine has signaled his faith in the GSX-R1000 by hailing it as ‘a podium contender’ ahead of the season start.

2014 marked a tough season for the GSX-R with the Tyco Suzuki team, but was still taken to two race victories with Josh Waters. However, respected team boss and engine tuner Jack Valentine reckons there’s still more to come from the iconic litre sports bike.

“I think the Suzuki has got a good chassis, it turns well and is a good all round package”, said Valentine speaking to Bike Social. “It’s reliable too. There’s no reason if we get the riders happy with the bike, the throttle connection and the power delivery, that it shouldn’t be a podium bike.

“If we were running in World Superbikes our bike would be top spec, obviously we’ve got BSB electronics but everybody else is in the same boat. We’ve got a good solid package it’s just about the detail now.”

Rather than purchasing Tyco Suzuki’s 2014 GSX-Rs after the team switched to BMW power for 2015, Valentine opted to build the 2015 Bennetts Suzuki machines from scratch with the help of legendary Suzuki tuning company Yoshimura.

“With the engines, you can’t do much bottom end as the BSB rules mean it has to be fairly standard, pistons etc”, he explained. “At the top end, you can do a lot of cylinder head work and development. We’re using camshafts from Yoshimura, we’ve got one of our engines and a Yoshimura spec engine and they’re both making the same power which is quite nice as our ideas are obviously similar to theirs. 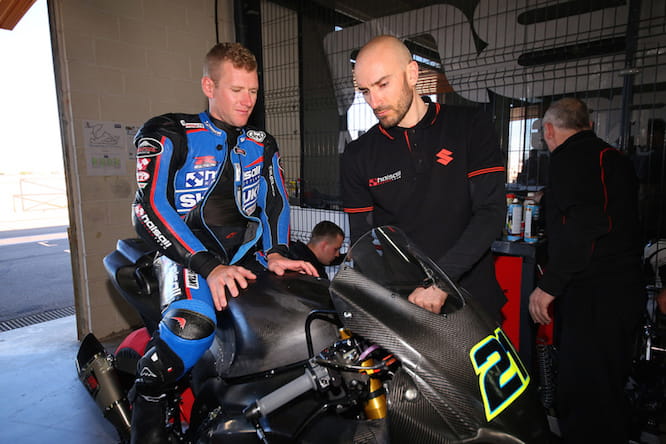 “We’re largely following what Yoshimura do, we started off with a 2014-spec, their best spec from 2014 which took them to pole at Suzuka, so this is a good solid base to build on and we’ll move on from there.

“The difficulty with preparation is that, taking Kawasaki for example, a tuning company like MSS can build say 12 swingarms for them because they know there are enough teams to use them. Whereas we end up buying what we need and it’s all bespoke, you can’t get it off the shelf. Little things like that can hold you up a bit but it does mean you have a good spec.”

Valentine acknowledges there are newer bikes on the grid, putting the GSX-R behind rivals in some respects, but doesn’t seem to think the gap is big enough for concern.

“A weaker point of the Suzuki is that it’s got a longer stroke than our rivals so we haven’t got the RPM. I think the BMW revs to 14,750 in standard which is about 1,000 RPM more than the Suzuki so that helps them a little bit, especially in the top end. Other than there isn’t a lot weak about the bike.

“The new Yamaha is a lot smaller and compact, so that will help them as it’ll be easier to get to the weight limit. The more modern bikes are almost race weight bike without bodywork so you don’t have to make as many special components. Other than that I still think this is a strong package or I wouldn’t have got involved with it.” 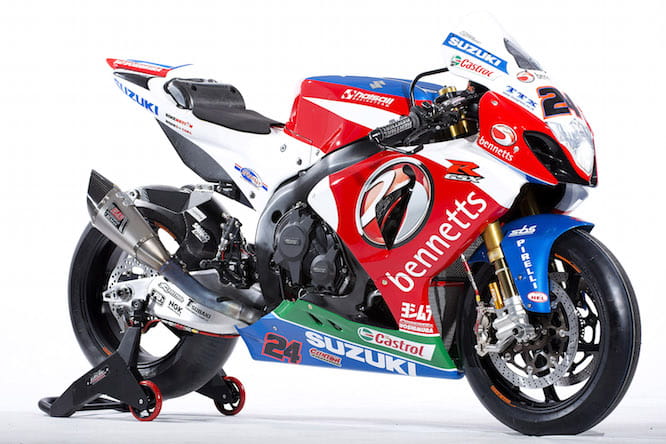 With manufacturers such as Ducati, BMW and Yamaha wheeling out 200bhp+ superbikes this year, some have said older bikes like the GSX-R will struggle, but Valentine doesn’t believe this is a problem. Not only does he say that the Bennetts Suzuki is already putting out a fair amount of power, but he also questions whether such figures are ever really used.

“The power curve on the bike is better than our Kawasaki was so we’re happy with that. It’s a good, proven package. I don’t think we’re too down on power, not with the current regulations. Over the years, when bikes used to come from the factory like in the 90s, we could take a bike and with a few tweaks to the exhaust or the carburation we could gain a customer15bhp just like that. Now all the manufacturers are bringing them out almost ready for racing. They’re coming out with 200bhp straight away out of a stock bike and they’re reliable. That makes it slightly harder to get any more out of it as they’re already in a high state of tune from the factory. Where the Suzuki may be say, 20bhp down on a BMW in standard form, we can find the 20bhp to get there where the other models are already in that higher state. We just have to do more engine work.

“The BMW teams could run completely standard engines with a good rider on board, they’re already in excess of 200bhp and that’s a lot of power on an English track. There’s only probably Silverstone and Snetterton where you’ve got a straight long enough for that little bit at the top end to come in useful. In the UK you need more of a useable spread of power so it’s not quite as important to have tonnes of horsepower. We build ours to be a good rideable motorcycle, so our boys can get the best out of it all round.

“It’s still a good bike. As I’ve said before, if you had Shakey Byrne on the bike he would still be getting the same results. It’s more than competitive.”