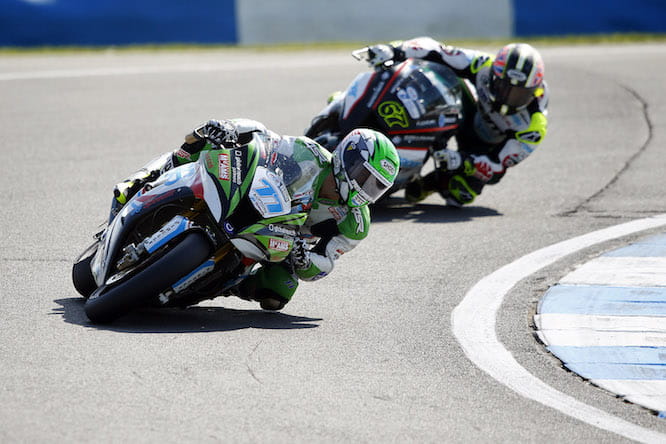 James Ellison and Shane Byrne shared the spoils on the first race day of the 2015 British Superbike Championship at Donington Park as pole-man Ryuichi Kiyonari endured a nightmare day on the Buildbase BMW.

Byrne took the holeshot in race one but an aggressive move from Ellison saw the JG Speedfit Kawasaki charge to the front, knocking polesitter Kiyonari wide.

A crash for Ralf Lo Turco at the Melbourne loop brought the safety car out on the second lap as medics attended to the Brazilian. Byrne led the field as the race was resumed on lap five, but Ellison shot past through Hollywood.

McConnell made an early exit on the Smiths BMW at Coppice as the battle for third started to heat up, with Essex boy Danny Buchan scrapping with Yorkshire’s Dan Linfoot followed by Easton, Hickman and Kiyonari close in tow.

Byrne and Ellison had built a 4.5 second lead on Linfoot by the midpoint as Danny Buchan crashed out on the 11th lap. Stuart Easton ran on at the old hairpin, managing to keep his Kawasaki upright before rejoining the track.

Having set the pace all weekend, Kiyonari appeared to be struggling falling back to 11th position by lap 17.

Josh Brookes closed down third placed Linfoot on the penultimate lap, looking to find away past the Honda man. 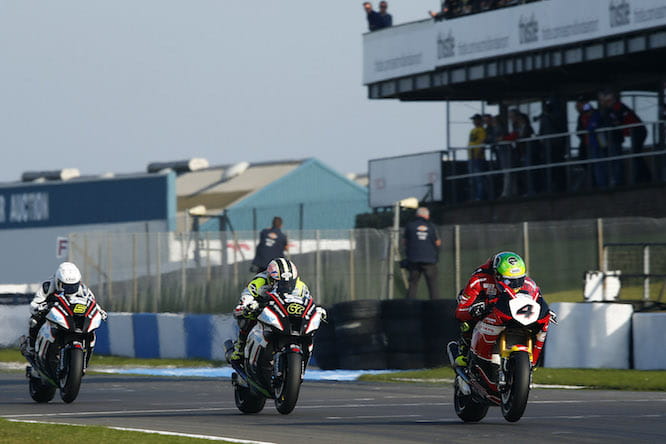 Ellison had enough on Byrne to take his first win since Assen 2013, with Brookes just clinching third from a defiant Linfoot. Hickman finished a solid fifth ahead of Tommy Bridewell and Christian Iddon on the Bennetts Suzuki. Chris Walker took eighth ahead of Laverty in ninth and Richard Cooper rounding out the top ten.

Drama struck at the start of the second race as the JG Speedfit Kawasaki team struggled to get James Ellison’s ZX10-R started, forcing them to make a quick battery change before the Cumbrian could start at the back of the grid. Byrne led into the first corner once again with Kiyonari making a strong start from the third row. Easton settled into second with Linfoot third and Kiyonari slipping back to fourth.

Having described his Honda as ‘rapid’ after the first race, Dan Linfoot moved into second on lap three before moving into the lead shortly after, ahead of Byrne with Easton and Kiyonari in tow and Josh Brookes closing in.

The five-way scrap was whittled down to three as Kiyonari dramatically crashed out at Coppice, forcing Josh Brookes off the track. Byrne managed to retake the lead but Linfoot came back just a few corners later.

The PBM Kawasaki man made a strong move with three to go, but, with no plans to give up, Linfoot took it back into the Fogarty esses. The lead then changed four times on lap 18 as the duo swapped paintwork in their quest for glory.

The Wetherby rider couldn’t quite keep onto Byrne into the closing stages, with the Kent man taking victory by 0.589 of a second. Stuart Easton took third on the second PBM Kawasaki.

Reigning champion Byrne leads the championship after the first round ahead of Linfoot and Ellison. Kiyonari sits sixteenth.