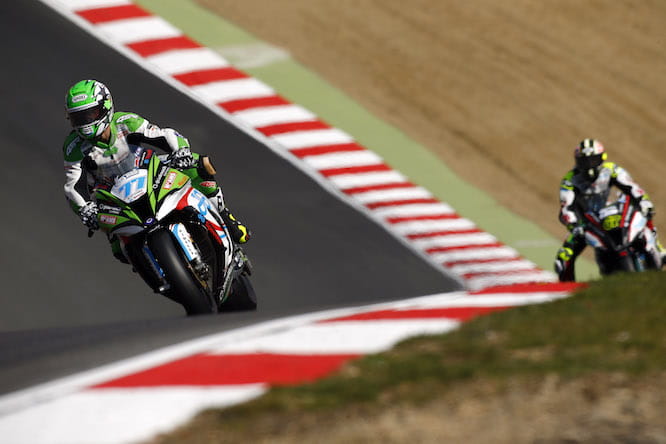 James Ellison has taken his first ever double victory in this weekend’s second round of the 2015 British Superbike Championship at Brands Hatch.

Ellison took the holeshot from Kiyonari and Stuart Easton. A huge crash for Christian Iddon wiped out Jack Kennedy and Robbin Harms on the first lap bringing out the safety car.

The race was resumed on lap four with Ellison leading Kiyonari and Byrne. 12 laps in and the leading duo of Ellison and Kiyonari had pulled out 1.5 seconds on Byrne in third.

Rhalf Lo Turco got in the way on lap 18, holding Kiyonari up before forcing the Kawasaki rider to lunge up the inside of the Brazilian into Druids.

The safety car came back out on lap 27 following a crash for Peter Hickman at Clearways. Three laps were added to the race as it resumed on 30/30.

Having benefited from the safety car, Byrne slipped underneath Kiyonari into Surtees with Josh Brookes also passing the Buildbase BMW on the line.

Ellison took the holeshot once again in race two, ahead of Kiyonari and Byrne. The Cumbrian immediately began to build a gap, setting a new lap record on just the second lap of the race.

Byrne took Kiyonari for second on lap five. The Buildbase BMW lunged underneath his rival at Druids on lap nine only to run wide.

The safety car came out in response to a crash for Dan Johnson at the mid-point. The race resumed with Ellison leading Byrne, Brookes and Kiyonari.

Ellison crossed the line to take his first ever double ahead of Byrne, with Brookes completing the podium once again.