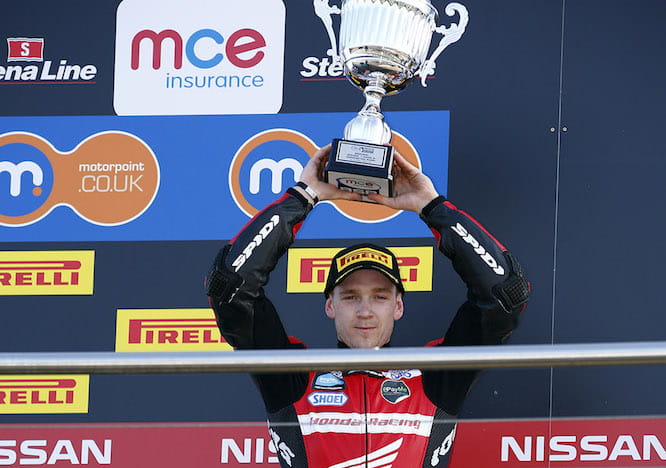 After leaving the opening round of the 2015 British Superbike Championship at Donington Park two weeks ago as championship leader, things were looking good for Honda Racing’s Dan Linfoot.

However, the Wetherby rider’s luck rapidly deteriorated this weekend at Brands Hatch as he crashed out of Friday’s opening practice session heavily and broke his arm.

Ruled out for the remainder of the weekend and the third round at Oulton Park, Linfoot admits he’s ‘gutted’ with the turn of events.

“Mentally, half of me is gutted that I’ve finally got my big chance in racing with Honda and I’ve had a good start to the year with a podium and I’m out at the second round!” he said talking to Bike Social at Brands Hatch.

“I’m a little bit deflated but you’ve got to put a positive spin on it, if there’s a time to do it I guess now is that time because of the six week break after Oulton Park. Given that, I should be fully fit for Snetterton as that’s nine weeks away, so plenty of time for this to heal.”

British Superbike takes a break during May to allow riders and teams to participate in the North West 200 and Isle of Man TT International Road Races, meaning Linfoot has nine weeks to recover before returning at Snetterton. 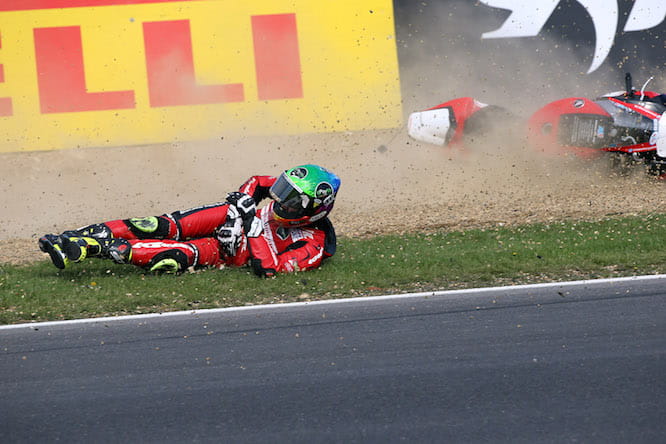 “I’ve got two clean breaks, one in the ulnar and the other in the radius,” he continued. “They’ve been manipulated back into place now and I’m waiting for the operation at Kings College to fixate it. After that I guess it’s whatever I can to speed it up, so hyperbaric or laser or whatever just to be certain I can recover as quick as I can. A big thanks to the medics at the track, they did a good job to get it back into place as quick as they could and a huge thanks to Honda for being so supportive.”

With the British Superbike championship running a ‘showdown’ system, in which the top six riders are elevated to fight for the title over the last three rounds, the crash doesn’t destroy Linfoot’s title hopes. There are six rounds between Knockhill and the end of the showdown meaning there’s plenty of time to catch up.

“My focus now is on getting back on the bike as quick as possible. It’s a gutting thing to be sat watching the racing this weekend but if I can be back at Snetterton I think it’ll be ok. Snetterton to the showdown cut off is six rounds so I hope that should be enough time to get the points to be in that showdown at Assen.”

But what actually happened in the crash?

“I just lost the rear coming out of clearways. I’ve been spinning the bike all year, from testing in Spain to Donington to here and I’ve felt really comfortable with that. Clearways throws in something different with the camber of the corner, but it span up a few laps before and I controlled it fine but I guess it got away a little bit too far this time and it threw me over and the rest is pretty clear!”

After such a strong weekend at Donington, Linfoot says he’s ‘buzzing’ for racing this year and doesn’t think the crash will change things much. 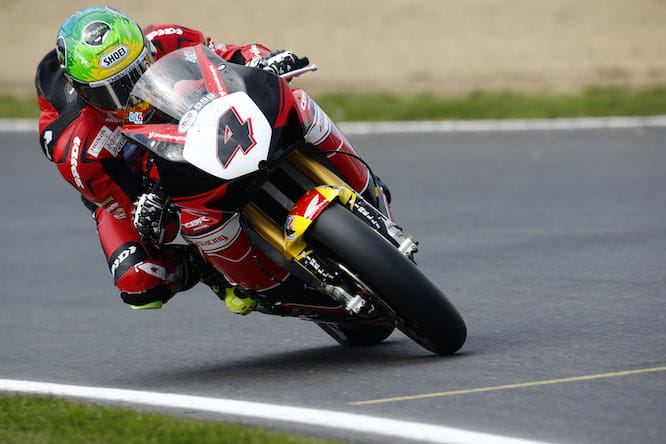 “I jumped on the bike and felt good straight away this year. Given that I had a good ride at Donington and feel good with the bike, once my body is 100% again I should be in a position where I’m comfortable enough to push straight away. I’ve never normally struggled with post injury confidence. As soon as the body is able the mind is able and I feel I’m as strong as anybody in that regard. After Donington I am buzzing about racing. I really believe now that I can win races here in BSB and I feel like I’ve been robbed of a few rounds trying to do it but life throws these hurdles at you and you’ve just got to get on with it and get back to work!”

It’s not the first time the 26 year old has sustained an injury at the start of the season. In 2013 he was knocked off on the first lap at Brands Hatch, suffering a broken pelvis which saw him wiped out for three rounds.

“I spoke with Mark from GBmoto this morning and we joked about how I’ve trained for this, I’ve had an injury at Brands round one before, been in the same hospital and come back at round four. I’ve been through it once already so I know what it takes mentally to come back and ride the bike for the rest of the year.

“This was the last thing I wanted, last year I was the most consistent rider out of anybody and finished every race. I didn’t want this, to not even start a race is a kick in the nuts but I’ll do what I can to come back as strong as I can to finish the job off for Honda Racing.”