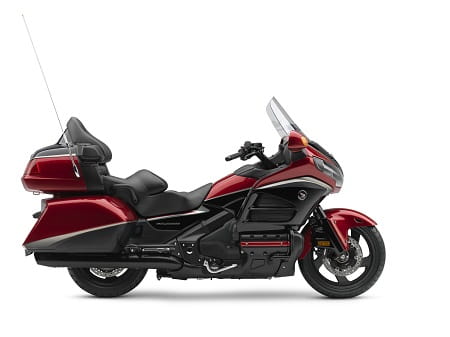 Would you believe it? The Honda Goldwing is four decades old next year and to celebrate the Japanese marque will release a 40th anniversary model.

The special edition model will be available in four colours including an all new two-tone red and black colour scheme with blacked-out chassis. Special 40th anniversary emblems will appear on the front faring and pillion seat while a commemorative key fob will also come as standard.

Other colours available include graphite black, pearl glare white and the new digital silver metallic with all 2015 models including the 40th anniversary features.

“The Honda Gold Wing has always stood alone” says Honda “Launched as the GL1000 in 1975 its horizontally opposed four-cylinder engine was not only physically different, it felt very different with a silky output perfect for long days in the saddle. A six-cylinder, 1500cc overhaul in 1987 saw the Gold Wing once again state its intent and purpose to benchmark the ultimate touring machine.

“The Gold Wing GL1800 which debuted in 2001, after eight years of intensive research and development, added further dynamic ability and riding enjoyment to the Gold Wing's repertoire. The box-section aluminium frame delivered stability and accurate steering at speed. It also worked with the unique flat-six engine to keep the centre of gravity low - a key factor in the bike's excellent low-speed balance and agility, which made twisting mountain roads or busy city streets a pleasure to negotiate.

“The core appeal of the Gold Wing remains its unique ability to make long-distance travel a truly rewarding and enjoyable experience. A visual update in 2011 - with improved luggage capacity - under the style concept of 'majestic aggression' perfected a look that is at once elegant, imposing and vibrant.

“The 2015 Gold Wing 40th Anniversary model will be available in a very special Candy Prominence Red/Graphite Black paint option. Both colours are tied together, and separated, by a silver band inlaid with 40th Anniversary emblems and the effect - along with the blacked out wheels, frame forks, swingarm and mufflers - is simply stunning. Finishing details are the 40th Anniversary emblems on the fairing front and inner, trunk lid and key fob.”