On Monday Kawasaki launched a promotion site for the new Ninja H2, a mystery concept set to be launched at the INTERMOT show in Cologne towards the end of this month. Now the Japanese marque has revealed ‘Vol. 2’ of the teaser programme, a sound clip of the new Ninja H2 at full whack. 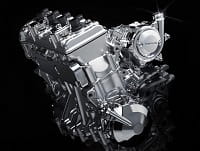 The sound clip confirms two things, firstly that the new H2 is most definitely not a reincarnation of the legendary two stroke H2 of old, as speculated by some after the first teaser on Monday and secondly that the H2 almost certainly features the supercharged engine revealed by Kawasaki at the Tokyo Motor Show last November.

Which model is going to receive the circa 1000cc supercharged motor remains to be seen but we reckon it could well be the latest version of Kawasaki’s 186mph ZZR14000.

Check out the teaser site: www.ninja-h2.com, the next video will be released on 5th September.