Not one, but two versions of ‘Honda RCV for the road’ revealed next week! 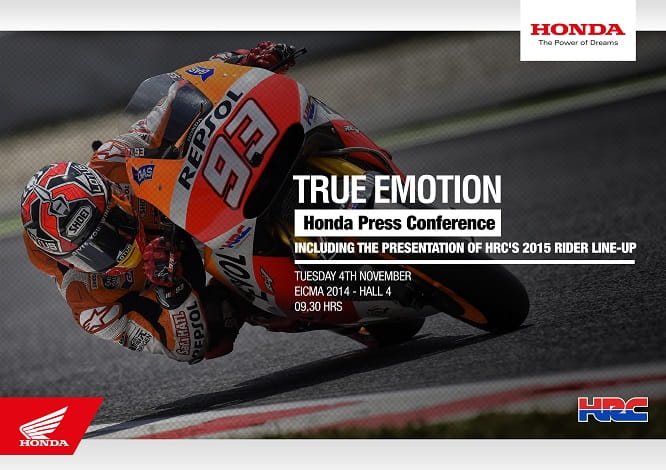 Honda will reveal not one, but two new V4-powered ultra-exotic MotoGP replica production bikes at the Milan Motorcycle Show next week.

Sources have been tight-lipped but it appears after years of waiting Honda will finally pull the covers of the most-awaited sports bikes in years. Covers will be pulled off both bikes at 10am next Tuesday at the EICMA Show in Milan.

Bike Social spoke to a number of people close to the project and they are already describing the bike as ‘an RCV with lights.’

The finished production bike is a V4 based closely on the ‘production’ race bike ridden by MotoGP rider Scott Redding this year.

The RCV road bike project has been on and off Honda’s list of bikes to get into production, but with all the hype surrounding the launch of Kawasaki’s H2 and H2R, Honda decided now was the right time.

Just last month our sources said that it could cost as much as £250,000, but that price now seems to be closer to £100,000 for the super-exotic 200bhp version when it goes on sale next year.

This V4 MotoGP-based production bike will come in two versions. One will be an ultra-exclusive 200bhp road bike in very limited numbers. It will be launched along similar lines to the ultra-rare historic Honda NR750 which was launched in 1992. Honda produced just 300 of them.

The top-end version of this production RCV is expected to be produced in similar numbers.

Though proud of Honda’s new showcase bike, some inside the factory are thought to be quietly disappointed that Kawasaki’s supercharged 296bhp Ninja H2R has already stolen Honda’s thunder in horsepower terms at least.

To rub salt in the wounds, Kawasaki are doing riding demos of the 296bhp Kawasaki H2R at the All Japan Road Race Championship race at Suzuka this weekend. The demo rides by Kawasaki test riders won’t have gone unmissed by Honda and HRC’s bosses as Honda actually own the Suzuka racetrack.

Much the same as Kawasaki has done with the Ninja H2R and the road-going H2, a slightly lower-specification and cheaper version of the RCV road bike (we don’t know what it’s called yet unfortunately) will make less than 200bhp, somewhere in the region of 180bhp from its V4 motor.

Both bikes have been developed and built in conjunction with Honda’s Racing Corporation (HRC) who are responsible for creating all Honda’s race bikes, including the MotoGP World Champion Marc Marquez’s factory Honda RCV213V.

Every race bike from the hallowed HRC plant are built to the same HRC ruling – they must be reliable enough to run flat-out for eight hours before an engine change. The ruling is a historical HRC legacy so race bikes could race and win the Suzuka 8-Hour if required.

This new Honda road/track bike will run much longer than that though. The new Honda will be the first MotoGP-inspired ‘replica’ since Ducati’s V4 Desmosedici RR was launched at a price of £42,000 back in 2006. 1500 of them were built.

Like the NR750, RC30, and RC45 from the HRC stable, the Desmosedici RR quickly achieved cult status and is a collector’s favourite today, with prices fetching more than new.

Bike Social’s team will be on the ground, and possibly drooling, to bring you all the news as it happens from the Honda launch and the rest of the news at the EICMA Show in Milan. Follow our live updates via Twitter.