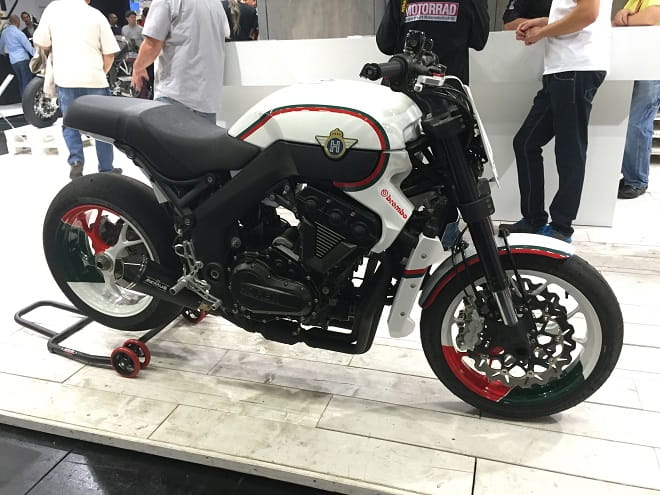 German motorcycle manufacturer Horex was back from the ashes at last week’s Cologne Show with a new version of its Volkswagen VR6 powered Cafe Racer.

The German firm filed for insolvency on August 29th this year, but was back with a bang at Cologne with a new race version of the three cylinder 1218cc roadster called the Horex Augusta Racer, and a new financial backer is also on the way in according to their spokesman.

They wouldn’t reveal who was stepping in with the cash when pushed them on it, but seemed confident.

A Horex spokesman said: “The decision to file for insolvency secures successful development and facilitates future partnership and cooperation in the long term. Our premium brand of Horex realistically envisions a successful future.”

The R4F race bike is based on the limited edition run of Cafe Racers and makes 161bhp in the race bike guise. The motor's original idea was based on the Volksgwagen lump from the VR6 but is actually now a complete new design.

This version which comes into the range with the Roadster, the Classic, and the Cafe Racer, is sprayed in the colours of the firm’s hometown of Augsburg in Germany.

Like the other bikes in the range the R4F uses an aluminium beam frame chassis developed by Horex and full Ohlins suspension front and rear. There's lightweight cast wheels and Brembo front calipers. It has minimal bodywork and in this guise is suitable for track use only.

What class the bike will actually race in is anyone’s guess. And the weight? How about quite a lot.

The road bike it is based on weighs in at 259kg for instance and at a price of £26,245 for the Cafe Racer, we can't expect to see much change out of £28,000 for this version. And in all honesty, we don't expect many people to be buying them at that either!