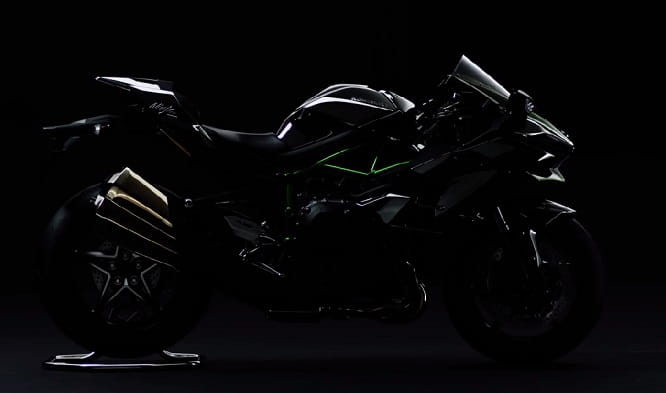 Kawasaki has revealed a first glimpse of the street-going version of the recently unveiled Ninja H2R.

Revealed in Cologne last week, the 296bhp Ninja H2R track bike stunned onlookers as one of the most technologically advanced and completely bonkers motorcycles to break cover in recent years. That wasn’t all though, Kawasaki confirmed it would produce a street version of the supercharged beast; the Ninja H2, set to be uncovered in Milan next month.

In a video released by the Japanese firm’s marketing department, the H2R is shown next to the street-legal H2 with further dimmed, close-up shots of both. The H2 features a larger, ‘emissions-friendly’ exhaust, tail tidy, and the ‘wings’ found on the H2R double up as wing mirrors.

The Ninja H2 is expected to be powered by the same supercharged 998cc inline-four motor as its twin sister, albeit a little de-tuned – Bike Social sources suggest the H2’s motor could produce anything between 200-250bhp.