Looking resplendent in its shiny coat and perched on a 360 degree rotating display at the Milan motorcycle show was the Brough Superior SS100. When the bike becomes available in 2015 it will become the first new model from the company that closed its doors in 1940 and laid dormant until the rights were bought by businessman Mark Upham in 2008.

The traditional British marque showed this V-Twin Sport Classic as a prototype at last years’ show but visitors to the Brough stand this year were kept well away from the bike as it twirled against a black background which added a sense of theatre and drama but disappointed by not allowing fans and perspective buyers a closer inspection.

The bike will be offered in three finishes; Traditional, Titanium or Black and marks the 90th anniversary of the original famous bike and it will be powered by an 88-degree, 997cc V-Twin with four valves per cylinder. The engine will be made in-house by the way. Power output will range from 100 - 140bhp depending on the ECU settings set by the factory according to the owners’ preference. 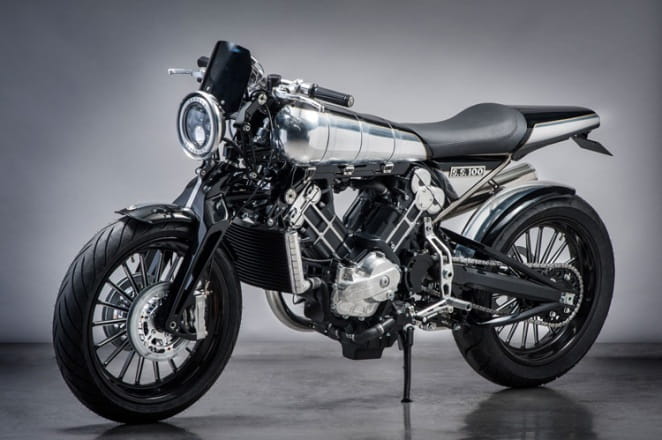 The all-new engine serves as the main structural component of the chassis with a Titanium sub-frame and aluminium/magnesium swinging bolted to it. The latter is connected to an Ohlins shock, the progressive link system being fully adjustable.

At the front end, a double wishbone arrangement based on MotoGP engineering called the Fior concept is used, the wishbones looking very period. (In this system the double triangle fork disassociates braking and steering.) It also uses an Ohlins shock with preload capabilities.

Staying with the retro look and appeal, the front brakes whilst looking period, are in fact twin 230mm double discs looking almost like a drum, but gripped by French Beringer calipers.  The discs are made of an aluminium-ceramic composite to reduce gyroscopic effort and weight. 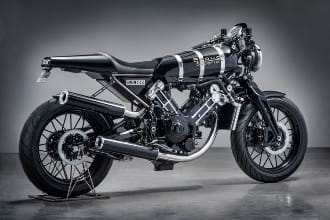 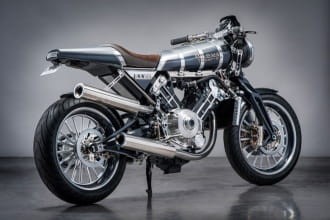 Brough claim the quad-disc system increases power by 20% over a single 320mm cast iron disc, thereby reducing braking distance. The gyroscopic inertia of the four-disc arrangement is said to be three times less than that of a 320mm disc as well! A similar disc is also used at the rear as you would expect.

The whole plot rolls along on 18- inch wheels shod with modern rubber and only weighs a claimed 179kg dry. As far as the quality of all other components is concerned, the SS100 exhibits the extremely high quality craftsmanship, plus high end components and materials you would expect given the heritage and neo classical styling.

However, the new bike is not the work of just one man as before, but collaboration between Upham, engine design specialists Akira and the French firm Boxer Design. The latter is headed by engineering genius Thierry Henriette who has been responsible for bikes like the Lamborghini bike as well as motorcycles bearing their own brand name.

Only 300 will be made, each with an engraved number with options of your name and the name of the model. Although since the unveiling, Upham has told Bike Social, "We were delighted with the reaction following the Milan show and we're now sold out!" 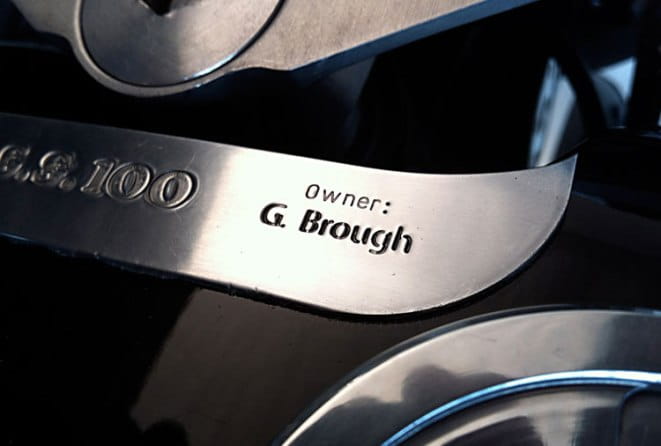