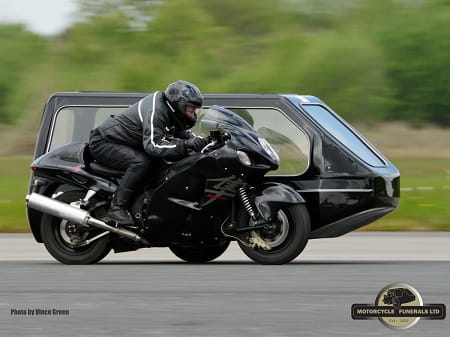 The self-proclaimed Faster Pastor, Paul Sinclair, has officially been confirmed as the Guinness World Record holder for the fastest ever motorcycle hearse at 126.6mph!

Although Reverend Paul Sinclair attempted the record run with his 180bhp Suzuki Hayabusa-powered Hearse in 2013, the run was only confirmed as an official World Record by Guinness last week.

The Faster Pastor said: “I derestricted the Suzuki Hayabusa and found numerous ways to improve the sidecar hearse, so in May 2013 I hit 126.6mph. After this was registered as an official record it was time to go to Guinness. Finally, after all these years I’ve finally got my Guinness World Record.”

The biking Reverend has been doing motorcycle-based funerals since 2002 and uses the Hayabusa-powered hearse for biking funerals regularly with his business Motorcycle Funerals. His fleet of motorcycles hearses includes a fleet powered by everything from a Triumph Thunderbird to a Harley-Davidson Electra-Glide hearse and the Hayabusa, of course.

Sinclair first attempted the Motorcycle Hearse world record over a quarter mile distance in 2002 with his Triumph Speed Triple hearse at 79.93mph. He did it again in 2004 with the Suzuki Hayabusa which hit 90.62mph in a quarter mile, but Guinness wouldn’t accept it as a proper record then. 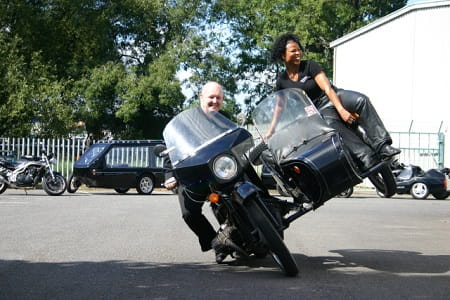 Rev. Sinclair explains: “In 2011 Guinness decided to accept the motorcycle hearse as a legitimate category, but wanted it run over one mile. This is highly unusual as most vehicles are tested on a straight quarter-mile, as indeed are the automobile hearses, but so be it. Off I went in 2012 to Elvington airfield where I set a new one mile record at 115.2mph on my restricted Suzuki Hayabusa. The racing authorities recognised this as an official World Record, but Guinness didn’t accept the way I submitted my application. My fault! In 2013 we did the 126.6mph run."