Putting a damp Bank Holiday BBQ into perspective was Dan Whitby from the Bolddog Freestyle Motocross Team who became the first person to jump a motorcycle across Bournemouth's pier. His FMX team then hot-footed it to London in advance of their semi-final audition for this year's Britain's Got Talent.

The 'live' semi-final in which the Bolddog team are competing takes place this evening (Tuesday) at 7.30pm in front of a TV audience expected to be around the 10 million mark.  However, because of the nature of their talent and the risk involved, Simon Cowell and the production team behind ITV's prime time show, have asked for the audition to be pre-recorded. 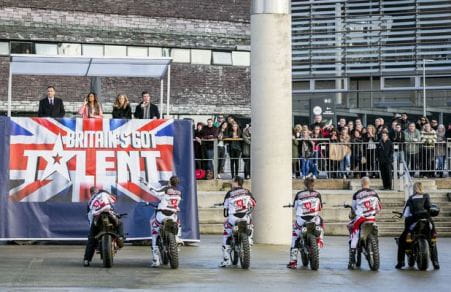 To celebrate the inaugural Bournemouth Wheels Festival where more than 1/2 million attended over the weekend, Whitby, jumped the famous landmark twice. His first run on Saturday was postponed because of the wind and rain but he conquered the challenge on both Sunday and again on Monday.

Bike Social caught up with Whitby, 30, from Harelstone in Norfolk after the jump. He said, "It was unfortunate that the inclement weather put paid to the Saturday run but I was very grateful for the opportunity on Sunday and Monday.  There was some light drizzle around on Monday which made it a bit more interesting!"

Speaking about the BGT audition, Whitby added, "We're really looking forward to it, there's been a lot of effort gone into this but don't waste your money by voting, just enjoy the show!"

Take a look at the Bournemouth Pier jump here:

And here is the footage from the Bolddog's audition for Britain's Got Talent in front of judges Simon Cowell, Amanda Holden, Alesha Dixon and David Walliams: