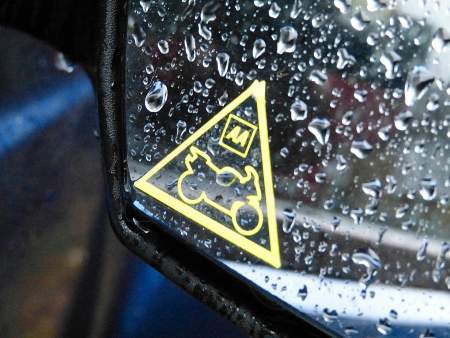 To encourage drivers to ‘Think Once, Think Twice, Think Bike’, the AA is distributing one million free stickers to raise awareness – proposing that drivers stick the motorcycle sticker on their right-hand wing mirror and the cycle sticker on the passenger side as a constant reminder of which side of the vehicle a motorbike or cycle could appear.

McGuinness and Olympic cyclist Chris Boardman have given their backing to the campaign which also has the support of the MCIA (Motorcycle Industry Association), the Mayor of London and the Metropolitan Police amongst others.

Some of the stats are worrying and the more we can do as an industry to support this campaign the better - a recent AA-Populous poll concluded that 85% admit that 'motorcyclists are sometimes hard to see' and 57% of drivers are often ‘surprised when a motorcycle appears from nowhere’.

Injuries to motorcyclists are out of proportion to their presence on our roads. Motorcyclists are just 1% of total road traffic, but account for 19% of all road user deaths. 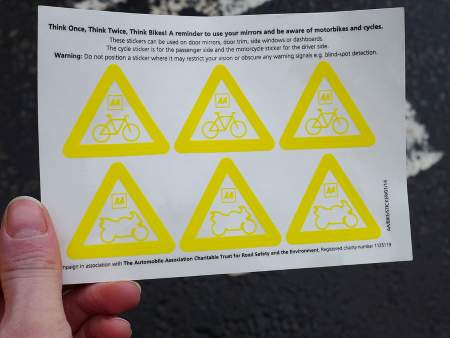 Honda Legends rider, McGuinness, said: "As a professional motorcycle racer, I definitely feel safer riding my bike on the track than I do on the open road. On the race track or at organised road racing events, you are riding alongside people who are acutely aware of their surroundings and the presence of other bikes. In the real world however, this is not always the case as too many drivers simply don't 'see' bikes and this can create a dangerous situation. The AA Think Bikes stickers serve to remind drivers to use their mirrors and be more aware of bikers on the roads." 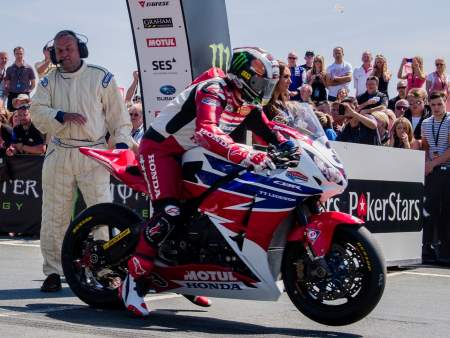 The sticker concept came from Tony Rich, AA Patrol of the Year, after his friend, Jack Bellis, was killed in a motorcycle crash. The stickers can be collected from Halfords outlets, the police or in renewal or joining packs for AA members.

Chris Jansen, AA chief executive, said: “We are very pleased to be working with Chris Boardman, British Cycling, John McGuinness and The Motor Cycle Industry Association as we are keen to see a ‘New Deal’ on the roads where all road users abide by the rules and treat each other with respect.”

Boris Johnson, Mayor of London, said: “This is a brilliantly simple idea which if widely adopted will undoubtedly save lives - and it reminds us, too, that cyclists and drivers have a common interest in looking out for each other."