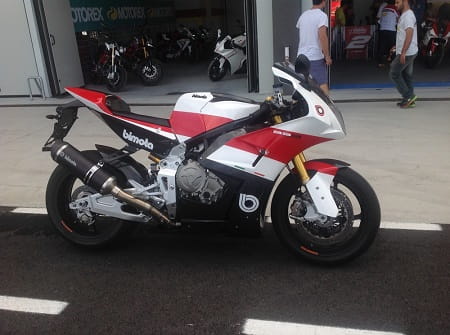 Take a four-cylinder 193bhp motor, place it in a hand-built chassis with the best sports bike engine known to man and you've got this - the Bimota BB3. It's the latest hand-built work of art from Rimini-based Italian motorcycle manufacturer’s Bimota. It's a BMW-powered lunatic in a grown-up posh frock.

The BB3 is a replica of the bike that has been winning races in the World Superbike Evo Class this year, and we were invited to Italy and the new Tazalo Nuvolari Circuit in Italy to ride it.

As the world changes and sports bikes sell less and less, most manufacturers are gradually shying away from involvement in World Superbikes and selling sports bikes as their main bread and butter (or should that be bread and oil?).

But, sports bike are what Bimota knows best, and as they come back from financial ruin, Bimota have new Swiss backers in owners Marco Chiancianesi and Daniele Longoni and are slowly rebuilding the company after its 40-year history and checkered past. The bosses were in attendance today, with Chiancianesi taking to the track in fully-branded Bimota leathers.

This is the first bike in a new line announced at the same time as the new owners at the EICMA Show last year. 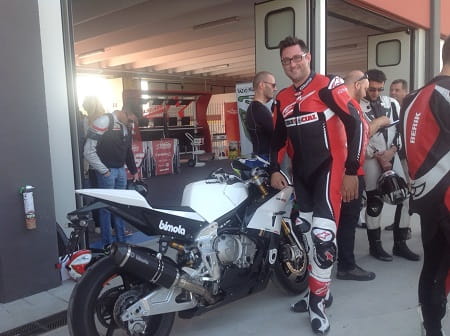 With a WSB team run by the legendary team boss Francis Batta, and the Alstare team, some top riders in Brit Christian Iddon, and Ayrton Badovini, and a range of new bikes, including the BB3 (stands for the third BMW-powered Bimota), Bimota are back.

It’s arguably the most-powerful Bimota since the company started taking hand-built chassis' and hooking them up with established engines way back in 1976. One of the founders – Massimo Tamburini – is a man who later designed such iconic bikes as the Ducati 916. He sadly passed away earlier this year but his legacy lives on. He's the ta in Bimota.

The BB3 may not be the most iconic-looking Bimota ever, but it’s definitely a bike Tamburini would be proud of. Well, he'd be proud of the idea, the quality of components and the finish at least. It uses the 193bhp four-cylinder motor from the 999cc BMW S1000RR.

On paper it weighs 1kg more than the bike it is based on, at 179kg dry, but in reality it feels like as thoroughbred race bike. Look at it and the bike is lashed in detail you normally wouldn’t see on a production bike. Because it isn’t. This is a Bimota and that means Italian flair, design ingenuity and an ultra-rare road bike. You may park next to another BMW S1000RR at a bike meet, but you're unlikely to ever park next to another BB3 unless you frequent the Rimini factory.

It's full of detail that will make any petrol head bow down and pray at the Bimota altar. The Ohlins forks and rear shock are top-spec, the brakes are the best Brembo make for production bikes, and the chassis is a hand-built steel trellis frame, machined billet aluminium side plates clamp to the rear engine mounts. In the metal it’s quite unlike anything you’ve ever seen. It’s beautiful as a Bimota should be, at least in the detailing - the lashings of carbon-fibre, and that exquisite trellis frame bonded to those machined aluminium plates. But, as for the fairing, I can't help thinking it looks a bit old-fashioned. Is it just me?

Think of this as a live trackside introduction as we didn’t want to make you wait for our initial verdict. We’ll bring you a full test soon, but after a few laps you can feel the bike is something incredibly special. Whether it's special enough to justify the 35,000 Euro price tag though I have to question. We'll bring you the full test soon.

FULL TEST COMING SOON! Well, when we get the pictures of the bike in action from Bimota it will be on the site!