This is the first finished picture and video footage of the new Ducati Scrambler in its almost final spec guise. Forget the noise testing equipment for a minute, and you can see the bike is almost ready to roll out of the shops.

The news comes in the same week that Ducati officially announced their Scrambler existed. Coincidence? We'll leave that to you to decide. 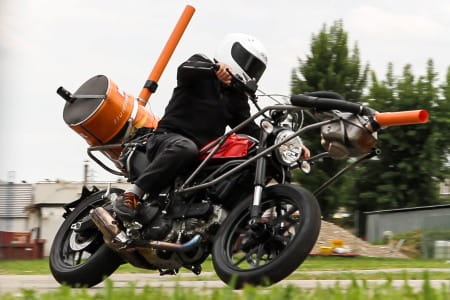 Additional framework was added to the bike at both the front and rear to hold an additional fuel tank, computer and transponder equipment.

As other pictures and video of the bike show, the engine and exhaust were encased in an aluminium surround with an emissions tube running from the exhaust outlet to the orange Motul tank mounted on the rear of the bike. Hear the test rider grinding down the casing here:

A test rider spent between 4-5 hours on the track outside Ducati's Bologna factory before the casing was removed for only two further laps - as shown in the photo here.

We understand the new bike will use the Monster 796's air-cooled engine. It won't be officially unveiled until later in the year and will be in dealerships from next year.

Ducati are keen to get some hype around the comeback of the legendary Scrambler name, not used since 1974.

The firm have already published a brand new website complete with a funky video demonstrating the new Scrambler-vibe. This, in conjunction with hiding a prototype inside a yellow shipping container outside the Bologna factory, have contributed to an already fun-packed marketing campaign based on the original Scrambler's 60's roots.