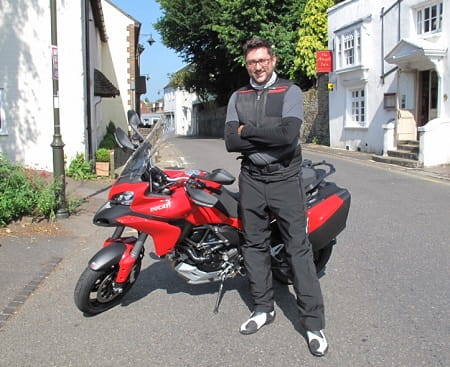 It’s not a complete first of course, Honda introduced an airbag system on the GoldWing in 2007, and there have been various airbag suits around for a number of years.

We’ve had a Dainese D-air race suit for about three years, for instance. But, this is the first time it has been fully-integrated into a bike where the rider wears the airbag, and we’ve tested it on the Ducati Multistrada 1200S Touring D-air.

Well, when I say testing, we’ve been riding around with the airbag system on our backs hoping it doesn’t set-off by crashing for a couple of hundred miles. But thought we’d tell you how it feels anyway.

The Dainese D-air system has been around for a few years but this is the first time it has ever been fully integrated into a motorcycle. It protects your back, collarbone and Thorax and massively reduces the usual roll-around of your neck in the event of an accident.

It’s fitted to the brilliant Multistrada 1200S Touring complete with Skyhook semi-active suspension. The bike is incredible, and the suspension really does take all the stresses and bumps out of the road, felling like you’re riding on a magic carpet. But, we’re here to talk about the D-air set-up.

The system uses either a £1409 fabric riding jacket, or a special Dainese D-air vest with all the airbag system built into it. The vest costs £713. That is a lot of money, but what would you rather have? A fancy exhaust pipe, or the confidence that you may save your collarbone if you have an unfortunate topple off.

The suit, or jacket, or waistcoat like we used, is wirelessly connected to the Ducati via a SIM, like in a mobile phone. When the jacket is fully charged, simply walk up to the bike, turn the vest and the bike on and the jacket vibrates like a mobile phone going off in your pocket to let you know it’s working. A green light, which slightly annoyingly makes it feel like the neutral light is being displayed, and there’s a battery level to show you how much charge is left. We had it on for two long days’ riding and it barely used any charge at all.

Sensors in the bike send a signal to the system to activate in the imminent event of an accident. It goes off in 45 milliseconds, which is around five times faster than the human eye blinks.

So how does it feel? Well, we never set it off thankfully, but psychologically you feel different when riding. Not invincible of course, but it’s nice to know that someone has your back, so to speak.

It’s still a bit heavy as you’re carrying all the airbag canister and electronics around, but once the vest is on, the weight is well spread out and it just feels like you’re wearing a back protector. The only thing I would say is that it’s a bit warm as you’re wearing another layer, but then it was a very hot day when we rode with it. 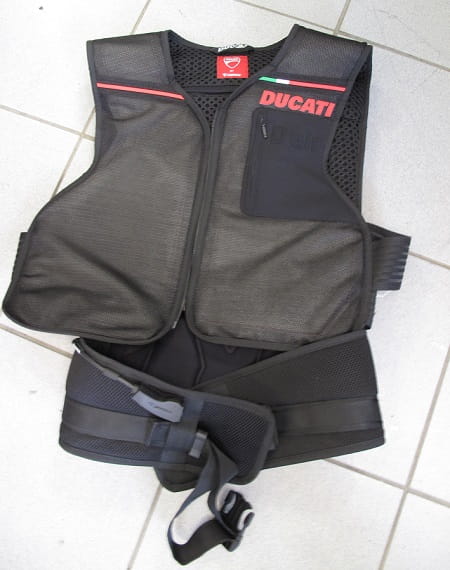 But, like the first time you wore a back-protector and then felt weird the next time you forgot to put it on, the D-air system feels like something is missing when you don’t wear it. In a few years’ time I reckon this system, or similar will feel as natural as putting on a helmet.

The kit can be bought from a Dainese store, or you can buy a Ducati Multistrada D-air, and Ducati can fit it as a kit to current Ducati models. Also, we reckon you can expect to see the system offered on Ducati models in the future.