Top 10 things to do at Triumph Live

Launched in 2010 at Mallory Park, 10,000 attended the inaugural one-day ‘Triumph Live’ motorcycling festival which included live music, demo rides and so on. It returned to the Leicestershire circuit in 2012 as a three-day event but now, for 2014, its new home is The Heritage Motor Centre in Gaydon and it takes place this Saturday, 12th July.

The event has grown in size and offers a host of opportunities to ride, plenty of displays to stare at and photograph plus retail and food outlets to immerse yourself in. On top of that, ex-racers Steve Parrish and James Toseland, TV comedian Rufus Hound and TT-winner Gary Johnson are just some of the familiar faces you can #selfie with. Trials champion Steve Colley and stunt rider Kevin Carmichael will be showing what many of us can only dream of doing with a motorcycle.

If you’ve never heard of/always wanted to do Moto Gymkhana then now is your time. Equally, you could learn how to trials ride or take any bike from the current Triumph range for a spin so long as you remember your licence. 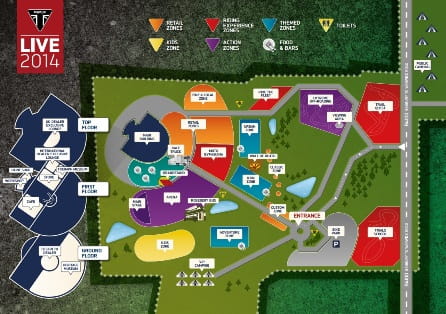 ***Limited Edition Bike News: Triumph will be using the event to launch a special edition 865cc  Bonneville T100s available to buy for just one day at £8,499. Just 50 bikes are available and commemorate the 50th anniversary of the International Six Day Trials where the Triumph team won a Gold medal. 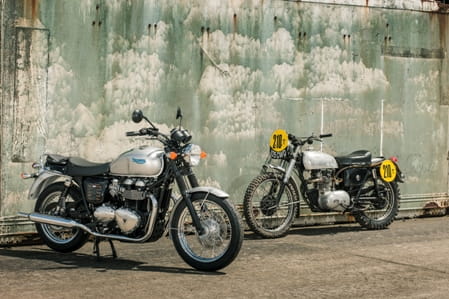 Here’s our Top 10 things to see and do at Triumph Live: 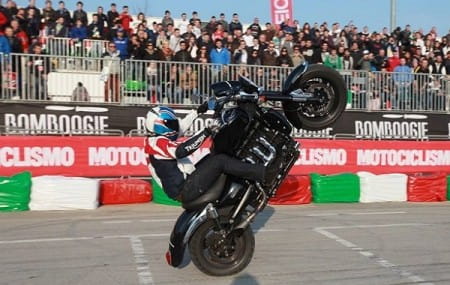 Ever pulled a wheelie on a 367kg Triumph Rocket III? No? Stunt rider Kevin Carmichael has. The ex-motocrosser will be demonstrating his well-honed skills and we caught up with him ahead of Triumph Live:

1. What did you do before stunt riding?

I started riding bikes when I was 7 and competed in Motocross before stunt riding. I won various club championships, was Scottish Expert Schoolboy Champion and came second in the Scottish Junior Adult Championship. And then I started stunt riding in 1997.

2. And what about injuries?

Too many to list! Especially in motocross, I would have won more championships if it weren’t for so many injuries. I have broken a bone for almost every year I raced!!

3. What do you like the most about stunt riding and why?

When a new stunt I have been practicing works successfully, it is a great feeling. Getting to see many parts of the world I would never have seen otherwise, is also a great bonus.

4. Which rider do you admire most and why?

Definitely AC Farias because he was one of the pioneers of modern stunt riding and has a unique style.

5. You are sponsored by Triumph, how are the bikes?

The bikes are great…leaving Suzuki to ride for Triumph has been one of the best things I have done. The bikes are very good for stunt riding, so in that respect I feel very lucky.

6. Which particular bikes are best for stunting and why?

I like them all for different reasons. The Speed Triple, for example, is very good for fast power slides. The Rocket III has an amazing effect on the audience because of its size and engine noise. The Street Triple is great for any trick where I have to be physical with the bike, as it is very light. They are all good in their own way, but if I was forced to choose one, it would definitely be the new Street Triple. It is really a jack of all trades.

I like doing powerslides and the new stunts I am currently training on are my personal favourites.

8. Who are your best mates in the stunt riding world?

It has to be Arian Van Sveden from Holland, and Chris from Duke Acrobat in France. They are both great guys and both a little crazy

9. Which shows have been most memorable?

There are quite a few that are memorable. Burns Day in France, Capetown in South Africa, and Triumph Live of course!

The campsite opens at 2pm Friday 11th July and close at 11am Sunday 13th July, meanwhile the gates on Saturday open at 9am and the music ends at 11pm.

Further information is at www.triumph-live.com with adult tickets priced at £28 while children under 16 go free!