Drivers: “the majority of motorcycle crashes happen because of bikers breaking the speed limit”

Almost unbelievably, research by Think! in advance of the campaign’s launch shows that drivers believe the majority of motorcycle crashes happen because of bikers breaking the speed limit. However, the statistics show that around half of motorcyclist collisions in which a rider is killed or seriously hurt occur at junctions, with drivers failing to look properly being the most common cause.

We’ve all been there, trying to attract the driver’s eye as they edge out of a junction, covering the brake just in case. 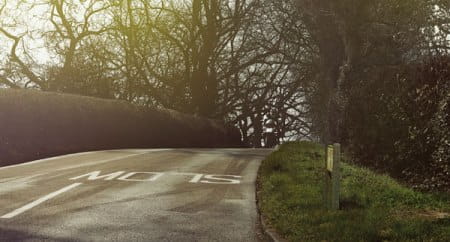 The above image used in Think!’s most recent campaign showing a motorcycle coming towards the camera over a crest against a background of trees has been circulating the internet for a few weeks now causing large-scale debate mainly over its authenticity. The purpose of the message is the most important part, not whether it’s been photo-shopped, because all motorcyclists will agree that the greatest threat to their safety on the road is other road users.

The objective for the campaign is to reduce the number of motorcyclist and driver collisions. Robert Goodwill, Road Safety Minister, explains more,

“Every day more than 30 motorcycle riders die or are injured in accidents at road junctions. Often, though not always, this is because a driver has pulled out in front of a rider.

“More than two people lose their lives every week in this way and this is something we are determined to change. If all drivers and riders took a bit more care at junctions we could bring this figure down significantly.”

THINK! will also be launching a new campaign this summer to encourage motorcyclists to undertake further training and to ride defensively to help improve their safety on the roads.