The BMF have taken a decision to cancel the Tailend Show at Peterborough due to take place on 13/14 September.

The cause of the cancellation is down to the organisers of the show, The Mulberry Group, having entered into voluntary liquidation last Friday, 11th July. As a result the company will not be able to run the Tailend Show nor any further business.

The three annual BMF Shows have been the cornerstone of every motorcycling event calendar with the traditional early season show in May held in Peterborough before the mid-season version in Kelso, Scotland and then back to Peterborough for the middle weekend in September for the ‘Tailend’.

The BMF’s events have been present ever since the formation of the Federation in 1960.

In a note to all its members, the BMF Chairman Roger Ellis said,

“The BMF will work with the Liquidators of Mulberry Events Limited in an effort to recover from them monies paid by members and exhibitors in relation to the now cancelled Tailend Show 2014.”

It continued, “There will be a lot of hard work and planning from this point so the BMF can reorganise arrangements to carry on with its events, in whatever form, for 2015 and onwards. A further press release on this will be issued in due course.” 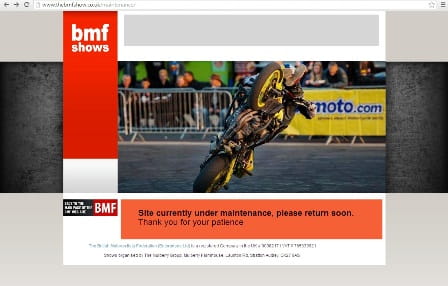 The BMF were also keen to state that it is in “good financial health and will continue to represent the interests of motorcyclists throughout the UK.”