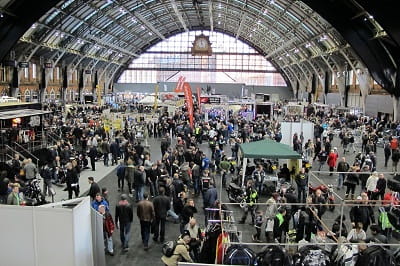 The huge Victorian clock still hangs over the cavernous Manchester Central venue, as a reminder that this lovely building was once the terminal for commuter trains which poured into Britain’s second city every working day.

Now, the ex-station hosts something more interesting than short haul trains and grey faced workers: it’s the home for the Manchester Bike Show which is the traditional, opening act of the northern, British, motorcycle season.

It’s a very friendly show, with plenty of space for visitors and exhibitors alike and gives the bike trade a perfect opportunity to keep in touch with customers – and for us grown-ups to forget Christmas and get back to real life on two wheels! 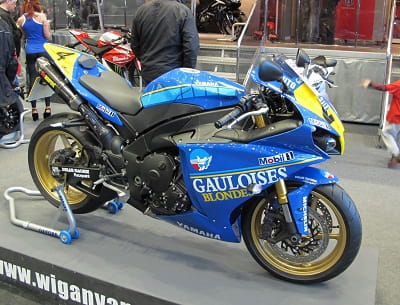 Wigan Yamaha’s Rob Ocego, who brought the Yamaha road show to Manchester, said: “It’s a great opportunity for me to meet customers informally who would otherwise have to make the effort to come into the dealership.

“We do sell bikes at the show but I am more interested in reminding customers that we are here so that when they are looking for a new Yamaha they automatically think of us.”

This view was repeated by Mark Samuels, Sales Manager of Suzuki dealer Road and Racing Motorcycles. Mark said: “We’ve got a great product range for 2014 and the new V-Strom 1000 is selling like mad. But we need to have our bikes in front of potential customers and so we have to make the effort to be here.”

Interestingly, on the other side of the selling fence, those customers saw the situation in the same way. Steve Gaulton, from St. Helens, who is in the market for a new AT bike, said: “I’m not going to buy a new bike until the Spring but the show gives me the chance to sit on some of the machines I am interested in without being pressured by salesmen.”

And which way is he pointing at 2pm on January 11th? “I really like the Versys. It’s a lot lighter than my Beemer, and at my age, this is beginning to be a factor.” Sohail Khan had made the long trip from London. Sohail was showcasing his new range of Pakistani made Hunter Class clothing. “We can sell customers a two piece, fully waterproof suit with built in CE approved body armour for £80. Beat that! And we do sizes and styles for female customers at no extra cost.”

Safety was very much on riders’ minds this year. Gerry Marsden, of Hearing Resolutions, was doing strong business with his custom made ear protectors. Gerry said: “2013 was the year when riders really woke up to the damage that riding a bike can do to their ears. Ear protectors tailored made for you means that they are truly fit and forget and you really can protect your ears.”

Peter Riley of Airvest, was having lot of fun frightening the pigeons as he demonstrated his instantly inflatable waistcoat. One tug of the cord, a really loud bang and in the blink of an eye the rider is protected with a flexible cocoon right up to the base of the skull. At £449, there was a queue of customers wanting to hike up their chances of walking away intact from a crash.

And the award for the busiest man at the show? Trevor Duckworth from 'Straightliners' who is organising a mammoth 32 sprint events this year. If you fancy your chances at setting a new world record in any one of the zillion categories available, or pulling the world’s fastest wheelie, then Trevor is your man. 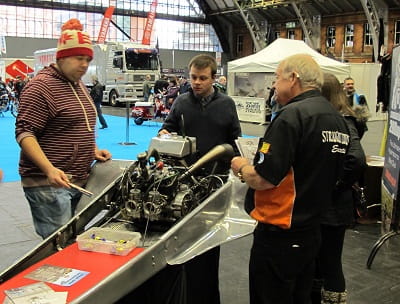