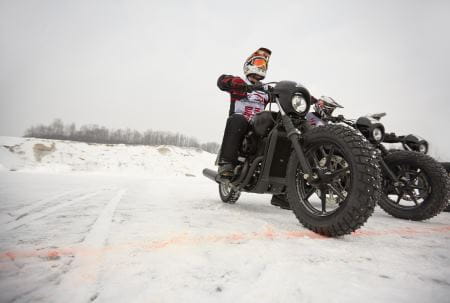 If you were to choose a motorcycle to go ice racing with, what would you say if we told you we had the perfect model: A Harley-Davidson Street 750? At the launch of Harley’s first-ever smaller capacity models in Milan last November, ‘oh this would ride well on ice’ wasn’t exactly the first thing that popped into our minds either.

Even Harley admit that the Street range is made for an Urban environment, but that didn’t stop the firm rolling them out for a promotional video in Aspen, Colorado to be used on sports channel ESPN as during the X Games opening ceremonies this past weekend.

With the Street 750 as of yet unreleased, few people outside the American manufacturer have had the chance to ride one of the new models so when it came to choosing who they’d trust to take the bike ona frozen lake it had to be an extremely skilled rider. 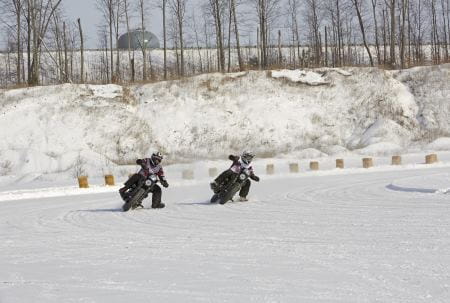 They happened to choose one of very few men who have beaten MotoGP Champion Marc Marquez on two wheels in the last year: Brad Baker, reigning American flat-track champion who just a few weeks ago beat the Grand Prix champ at the Superprestigio in Barcelona.

Baker was joined by fellow dirt-track stars Nichole and Jared Mees in riding the Street 750s fitted with studded tyres on a frozen lake in Northern Michigan, in a move to push ice-racing with Harley suggesting it should become a medal event at the Winter X Games in future years, encouraging fans to tweet using the hashtag #XGIceRace .

Ice racing is one of the least well-known forms of motorcycle racing, with a large amount of the FIM sanctioned events taking place in Russia, Sweden and Finland. There is also an ice-racing scene in Canada and the states, but inclusion in the winter X games would boost the sports profile massively. With no confirmation as of yet, we’ll have to wait and see whether Harley Davidson’s campaign was successful!