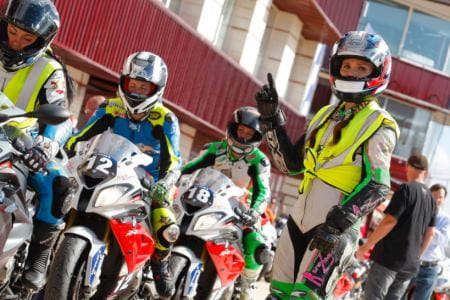 The FIM has announced it will organise more racing training camps for women after the success of an initial event at the Albacete circuit in Spain last October. The FIM’s Women’s Commission organised the first event alongside BMW Motorrad and brought along big named instructors to run both on and off-track sessions.

The first of the 2014 camps will be held at the Almeria circuit in Spain from 17 to 19 February, where women will receive both on and off track sessions in order for to improve their road racing skills.

“It is my great pleasure to announce that the FIM will organise several Road Racing training camps for women in 2014 in partnership with BMW Motorrad and Bike Promotion”, explained FIM Women´s Commission Director Nita Korhonen.

“The first ever FIM training camp for women organised last October at the Albacete circuit in Spain exceeded all our expectations. The female riders who attended the camp were eager for more training and many others who were not able to make this first camp were keen to benefit from such an opportunity in the future.”

Big names from the racing world will be in attendance to offer top-level training and advice to participants, including FIM Women’s Commission member and British road racer, Maria Costello MBE.

“Being part of FIM’s Women Commission is an honour and I'm very pleased to play an active role in FIM Women Road Racing Training Camps this year”, said the Manx Grand Prix podium finisher and once fastest woman around the TT.

Costello has long been a champion of encouraging more women to get on two wheels, in both the racing realm and on the road. In 2013, she held the UK’s first women-only track days and has two more planned so far this year.

More info on registration for the 2014 FIM women’s training camps can be found here.