Your eye may have been drawn immediately to the fuel tank where a national flag design from each of the home nations is apparent. Although there is a plain white version available if you’re feeling less patriotic.

Marketed as commuter-friendly bike for just £1200, the four-stroke, air –cooled, five speed machines has cleverly just been announced during a Tube strike. Extra bonus to the marketing department for that one. 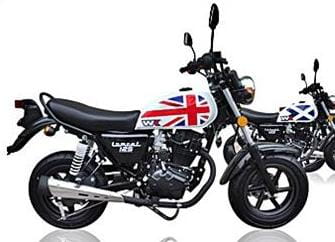 The spec includes a low seat, a hydraulic front disc brake and 12 inch wheels. Delivery is expected at the end of May from dealers throughout the UK.