Hesketh's new bike, the '24', is due to be unveiled at the end of May but Bike Social understands it’ll have three inter-connected fuel tanks and this model will be the base for a two-seater version which is already in the planning stages. 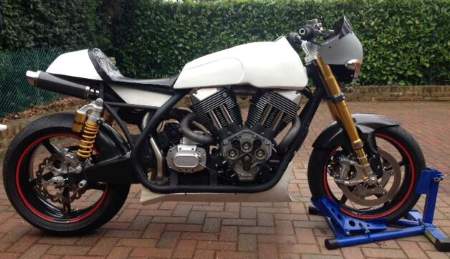 Hesketh Boss Paul Sleeman bought the company in 2010 and the new bike has been in development ever since.  Once Sleeman and his design team had settled on which engine to use for the new machine, a tuned 1950cc S&S motor which is Euro3 compliant for its emissions, the next step was to feed it. But being so large, a normal sized fuel tank wouldn't do the job.

So the 22.7 litre fuel tank has been dissected; a ¼ sized tank will sit where you’d normally expect to find one, the second part will be underneath the seat and the third in the belly of the bike. All of which will help with mass centralisation and to alleviate some of the handling-based criticism of the original machines.

The single-seat  24 will re-launch the traditional British motorcycle brand which has been relatively dormant in recent years, other than revised versions of the V1000. The platform will allow the Surrey-based firm to move on to a twin-seat version with somewhat more contemporary styling, a different exhaust system and more freedom with the fuel tanks. The production model will be around £30-35,000 which will deliberately position the cost of the bike between other British brands Norton and Brough. 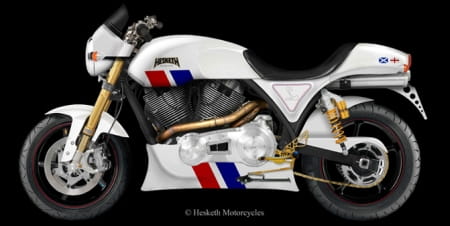 Hesketh's Twitter page shows a sneak peek at the '24' from early April, the bike is currently at Sleeman's personal residence.

Whilst the frame is being outsourced to America, Sleeman is keen to have as many British components as possible. He explained to Bike Social, “Because these big twins break things  we have to use the experience of a company who are used to doing these things but I want to source as much British stuff as I can and I’d like to make as much as I can otherwise you’re bunging all your profit out the door."

Details of the bike ware announced at the beginning of December 2013 and Sleeman had every intention of pulling the cover off in February of this year, however, things haven't quite gone to plan.

He said, "There’s been quite a delay but when we create a part for the bike I stand back and if I don’t like it then I’ll throw it away because unless I’m completely happy I’m not sending it out there.  This bike will only be unveiled once. I’m hyper critical but I’m beginning to enjoy this bike.” 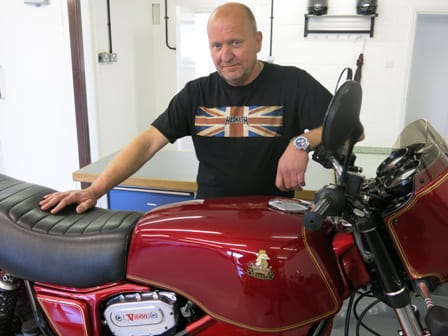 Sleeman also confirmed that there will definitely only be a limited run of 24 of the ‘24’ based as Hesketh’s reintroduction. He’s also confident that all 24 will be sold, with interest from Australia and America already.