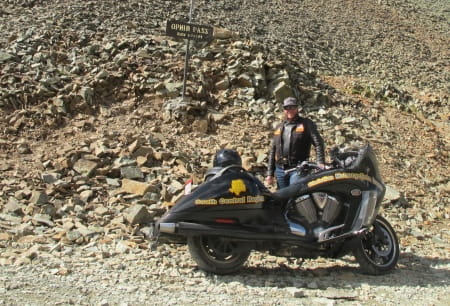 Victory Vision motorcycle mounted rider, John Ogden has set two world records over an 11,789 foot high Colorado mountain pass. Ogden topped the 11,780 foot high Ophir Pass in the San Juan Mountains of Colorado taking two records by becoming the first Victory motorcycle to ascend, summit and descent from east to west over the Ophir Pass and he also bagged the record for the motorcyclist on the largest displacement to ascent, summit and descent from east to west on the Ophir pass.

The 2012 Victory Vision has a displacement of 1731cc and a dry weight of 869lbs and was equipped with street tyres for the record attempt. Ogden made a circuitous route from his home office in Hatfield, Arkansas to the Big Dog Aventure Ride via the Sturgis Motorcycle Rally. Upon arriving at the annual Big Dog ride, this year based in Ridgway, Colorado, Ogden awaited for a break in the inclement weather before attempting to top the Ophir Pass.

The attempt followed world record rules, with Ogden on an ‘unassisted observed world record attempt’ with no helpers, spotters, ropes or coaches/guides. The annual Big Dog Adventure ride is an annual gathering of a fraternity of like-minded aficionados sharing a similar way of thinking.