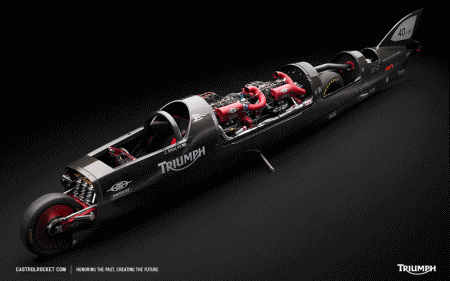 Triumph are to return to the Bonneville Salt Flats next year as they look to take the World Land Speed Record. The weapon of choice is what Triumph claim to be “the World’s most technologically –advanced streamlined motorcycle” – the Castrol Rocket.

Built like a fighter jet, the Castrol Rocket with carbon kevlar monocoque chassis is powered by two Triumph Rocket III engines prepared by Carpenter Racing. The engines have had their combined displacement reduced to 2,970cc to meet the class requirement of 3000cc. Each engine produces 500bhp (1000bhp combined) and 250ft.lbs of torque (500ft.lbs combined).

"Land speed racing is the purest form of motorsport. It's about bringing all of your ingenuity, resources and determination together for a constant battle against the elements," said pilot Jason DiSalvo. "The salt surface has little traction. The wind pushes against you from every side. But what's really special about Bonneville Land Speed Racing is the people. The conditions are so challenging that for the past 100 years, racers with little else in common, have banded together to support and encourage each other to become the world's fastest."

From 1955-1970, with the exception of a brief 33 day period – Triumph was the World’s Fastest Motorcycle and they’re looking to take this title back at Bonneville in 2014.