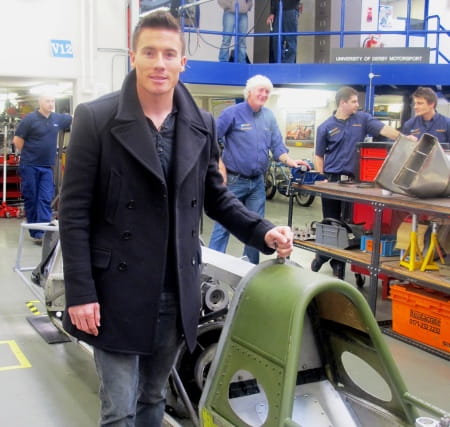 Back in December last year, it was announced that double World Superbike champion, James Toseland will attempt to break the world motorcycle landspeed record (currently 376.156mph) in a turbine powered streamliner.

Last month, Triumph announced they’d be going for the record too, as they return to the Bonneville Salt Flats with what they claim to be the “most technologically advanced streamliner in the world”. Piloting the Castrol Rocket will be Jason DiSalvo, twenty-nine year old AMA and FIM Land Speed Record Holder, 2011 Daytona 200 winner and 14 time AMA race winner. Triumph have a long history in landspeed records and they’re keen to get back in the game.

However, the Toseland project, dubbed ‘The 52 Express’ is unfazed by Triumph’s announcement. “The arrival of The Castrol Rocket is great news for the bike land speed record.  Triumph have a rich heritage in this area with their Bonneville model being named for the place where they set their first records in the 50’s” said The 52 Express Team Principal Alex Macfadzean.

“With the 30 year Richard Noble stranglehold on the outright record looking set to continue, we’ve been saying for ages that the bike land speed record is the next great battlefield capable of attracting multiple serious contenders and widespread public interest. In recent years, Mike Ackatiff/Rocky Robinson and Dennis Manning/Chris Carr have traded the record back and forth towards 400mph but they too want to see more competition. With Sam Wheeler about to join the fray with his extensively re-engineered and re-engined streamliner and us moving ahead to complete The 52 Express next year, that makes five wheel driven bikes that all look capable of exceeding 400mph. And the great thing about record breaking is that we are all trying to do the same thing using different designs.”