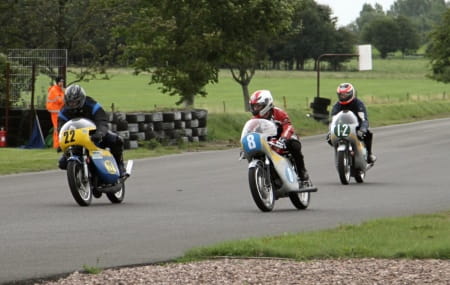 Despite the hostile weather forecast the sun broke through the clouds for the start of the Thunderfest at Darley Moor, with a packed grid of classic riders striving to reach their personal target times in a tough, 16 lap competition.

Thunderfest is Britain's only time trial - a test of riding skill as well as speed. Competitors decide their own average speed and then battle to ride smoothly and consistently to achieve it.
With bikes ranging from early 250 Hondas to late post classics, there was a great display of biking nostalgia in the Darley Moor paddock.

The riders were equally diverse with current classic racers and hill climbers mixing it with gentleman riders who had very limited track experience. In fact, one of the attractions of Thunderfest is that participants don't need an ACU road race licence but can ride with a sprint, hillclimb or one
event licence purchased on the day.

After two, long, free practice and qualifying sessions, it was time for riders to declare their target speed for the 20 minutes, plus one lap, Thunderfest.

As the time sheets were being distributed, the first huge drops of rain fell and now riders had to take a bet on the weather staying dry - or the predicted storm arriving! 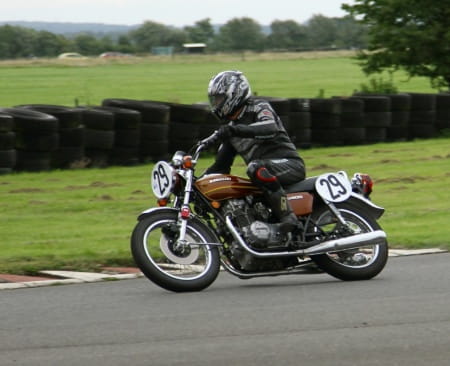 At one end, there were the optimists led by Frank Melling on his Seeley Suzuki. Frank said: "I had managed a few laps at over 70mph in practice so I let Martin Crook (the Chief Technical Officer for the event) persuade me that that 63mph was achievable in the damp. What neither of us counted on was the epic rain which was arrived the moment I gave in my time sheet."

By contrast, last year's winner, Rick Quinlan, took a much more conservative approach predicting a 50mph average and managing to get within an incredible 0.26mph of the time making him the outright winner for 2013.

Jim Ross made the long trip from Scotland to Darley Moor and took home the C1 class trophy for his efforts being only 0.6mph off his target and Mark Stubbs, from Crewe, coaxed his 400 Kawasaki round through the monsoon rain to win class "B".

Mark said: "The Thundersprint was lots of fun, the weather didn't really spoil it and I was gob-smacked when I won my class.”

"That's probably the only time a standard Z400 road bike has won a competitive event of any kind."