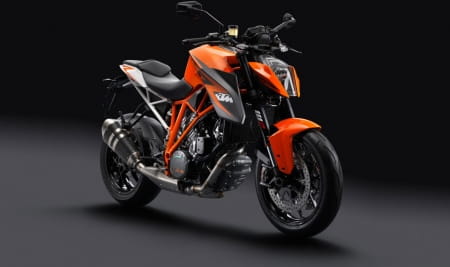 KTM have this morning revealed the long awaited production version of their Superduke 1290 R prototype, the 1290 Superduke R. The 1300cc liquid cooled 75-degree V twin engine produces a whopping 180bhp and is mounted in a chromium-molybdenum-steel trellis frame. With 0-125mph in 7.2 seconds the new 1290 R will blow your mind.

For a 1300cc 180bhp machine, the “Beast” weighs just 189 kilos. Based on the explosive 1290 prototype that shook EICMA last year, the 1290 R has equally fierce design and sounds incredible (if you don’t believe us, head over to the KTM website to have a listen for yourself). 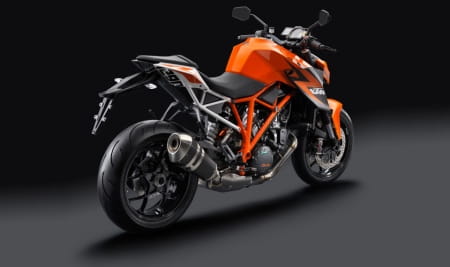 Standard with Brembo M50 monoblock callipers which bite powerfully into 320 mm brake discs – assisted in the event of an emergency stop by Bosch combined ABS. If you find that a bit boring, you could try Supermoto ABS mode – full ABS at the front but freedom at the rear to slide it how you like. Of course if you fancy a real challenge, both traction control and ABS have the option to deactivate.

In rain mode the 1290 R rides smooth with limited power and early intervening traction control. Stick it in street mode and you’ll find it sporty but effective and sport mode? All KTM can say about that is it is “the full works, with sharp teeth and controlled drift feeling”.

The Superduke 1290 R will be available in the UK in December, with prices still to be announced.

The 180bhp 1290 R is one of the highest performing naked bikes ever seen, how will the naked version of BMW’s 200bhp S1000RR to be unveiled later in the year at EICMA compare? 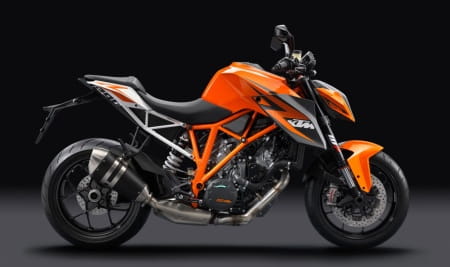