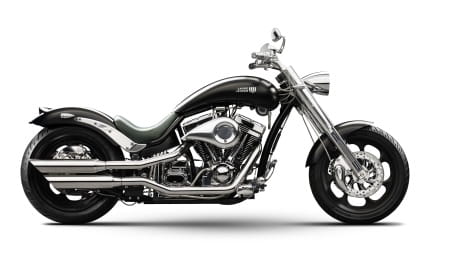 The new EURO 4 emissions laws will be implemented from 1st January 2016 and will run to the 31st December 2020 with the aim of drastically reducing the amount of harmful exhaust gases produced by motorcycles getting into the atmosphere. It will be mandatory for all manufacturers to pass the tests, which it is claimed are almost 50% more difficult to pass than the current EURO 3 standard.

(The EURO 4 tests take place at T�V Automotive in Pfungstadt, Germany. The motorcycle used in the test must have been running for at least 1000km to give a fair reading, as the efficiency of catalytic converters declines with use. Bikes are placed on a rolling road to simulate various riding situations and engine behaviour. The EURO4 test lasts for 1800 seconds and is completed six times, compared to EURO3, which tests the vehicle for 1200 seconds three times.)

Founded in Horsens, Denmark in 2008 and named after its founder, it was purchased in 2012 by a local successful businessman Anders Kirk Johansen to allow Jensen the capital to continue working on the bikes. Now the Company is the only custom motorcycle manufacturer with a worldwide manufacturer ID and although each bike starts with the same chassis and engine, the rest is hand built to order and according to the purchasers design requirements.

Jensen and his team took the basic 1800cc V-twin American S&S motor which is built in the USA at Wisconsin, USA and then designed their own pistons, camshafts, exhaust and catalytic converter, along with the software to programme the fuel injection system. Initially the changes to meet the new regulations resulted in a loss of power and changed the noise characteristics to the new motor they called �1-Eleven Squarehead�.

However, after a lot of hard work these were restored again and the overall fuel consumption was improved as well. The Director of Development (and founder) Uffe Lauge Jensen commented: �At Lauge Jensen, we think of the engine as the �heart� of a motorcycle and, it is certainly important to have a strong, healthy heart! Being first with EURO4 may not be a primary concern for some of our customers, but it will give them the reassurance that they own a fantastic and personal motorcycle, which is future-proofed, and ahead of the rest in its low emission output.�

The new engines will be at the heart of all their new models which start at �52,800 (plus local taxes and VAT and any shipping requirements) for a hand-built, personalised luxury motorcycle.