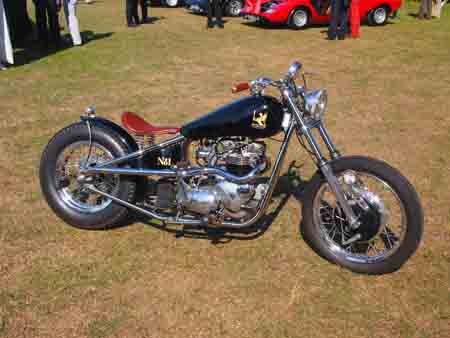 A brand new British motorcycle called the Gladstone made its public debut this week at the prestigious Salon Prive 'boutique' motoring event at the stately home of the 12th Duke of Northumberland - Syon House. Surrounded by 200 acres of parkland alongside the River Thames, it provides the ideal setting for the event, being just ten miles from central London with all its various transport links.

Such surroundings and the ambience of an automotive event of this nature aimed at high-end collectors, buyers, owners and enthusiasts may not seem ideal for a motorcycle launch. But, as the new machine is aimed at the same market with a staggering price tag of £28, 950 it was an obvious event to debut the bike at, especially considering the origins of the brands name.

The company CEO is Henry Cole who bills himself as a “lifelong passionate motorcycle enthusiast, writer, adventurer and is the TV presenter of two long running TV series: World’s Greatest Motorcycle Rides (Travel Channel Worldwide) and The Motorbike Show (ITV4)”. Cole’s Great, Great Uncle was Gladstone the British Prime Minister, hence the name, with the logo being an interpretation of Cole’s side of the Gladstone families’ Crest.

Apparently according to Cole, the aim of the company is to manufacture the finest hand-built British motorcycles for “Discerning Hooligans”. 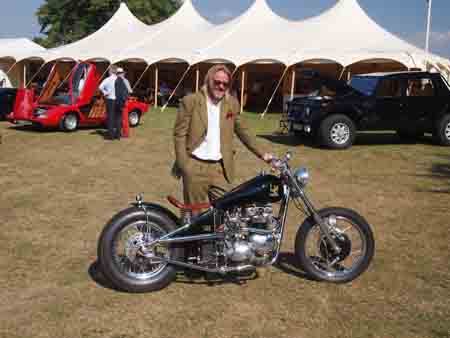 On display at the launch along with clothing and accessories to support, was the first of the nine inaugural ‘Gladstone No.1’ machines, which will be built with delivery starting in April 2014. According to the staff on the stand each Gladstone No.1 requires a build programme lasting six months and will be delivered with a brass plaque on the dummy oil tank to denote the production build number.

Conventional Ceriani Triumph style front forks keep the front end suspended and the whole plot rolls along on a 19- inch front and 16- inch spoked wheel shod with old style British Avon tyres.  Braking at the front is provided by a four-leading shoe Grimica drum brake, while a milled out Triumph Conical hub with drum brake slows the rear wheel.

The rest of the parts on the bike are exclusive, handmade bespoke parts made by the company itself ,which include a 5-inch Gladstone Smith’s Speedometer, hand crafted diamond stitched plush leather seat and grips to name a few of them. The alloy petrol tank and fake oil tank are painted black which is the only colour option available.

It is very minimalist in looks and execution, but unfortunately a close look at the engineering shows many flaws, some appearing dangerous. Certainly any rider out on the public highway with its open pipes will attract the interest of the forces of law and order who may have a field day!

Staff were quick to point out the show bike, which smoked heavily on start-up was a prototype test bike and many of the faults will be fixed on production models.

However, three people had apparently put their money down, which just shows the Danny Kaye song about the ‘Emperor’s new Clothes’ is still just as relevant today, or maybe it was the champagne!