It uses Formula One technology alongside Brembo brakes, Ohlins suspension, adjustable Marzocchi forks.  Add in Panigale-esque  styling and an equivalent torque band to the 1199 and equip it with CBR600RR handling, how good does that sound?

What if we told you it was electric, how many people would stop reading here?  Well Bike Socialites…we implore you to read on because even the company’s CEO claims “no sound means no passion”. 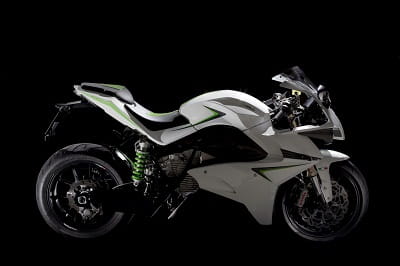 The bike is called the EGO and features its own KERS system and ABS as standard.  It’s from ENERGICA, an Italian-based sub brand of CRP Group, who for the last 44 years have developed Formula One parts most latterly for the likes of their neighbours Ferrari as well as Red Bull and Renault.  And now they have seen an opportunity for high performance sustainable mobility with a bike that was launched at EICMA in Milan at the end of 2012.  Since then the development process has continued whilst distributors around the world sought for this stunning-looking machine which is equipped with a Permanent Magnet AC (PMAC) synchronous motor designed by CRP and a full ride-by-wire (naturally!) with selectable power maps.

The bike will have around 134hp (100Kw) of power and a whopping 144 ftlb of torque (195Nm) from 0 to 4700rpm and initially offers a range of 95 miles at a speed of 44mph…although who rides a sportsbike at 44mph?  The 11.7 kWh batteries can be fully recharged within 3 hours with a normal European socket or in less than 30 minutes to 80% of batteries capacity.

Noise, a bone of contention for some with electric machinery, is provided via the adopted straight-cut final drive gears, also seen in the drive train in today's Formula One cars. Energica claims that the bike "roars". 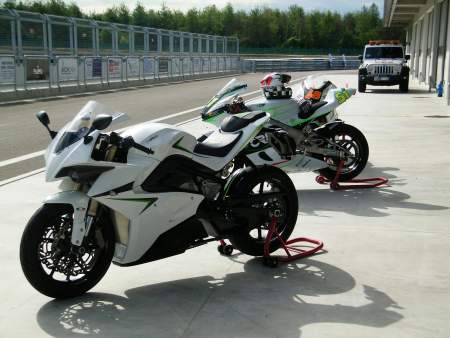 Many will not yet concur that electric bikes are the future.  From the classic bike lover, the traditionalist, those who love the smell of oil and fuel and those who don’t see it as a long-term solution to diminishing supplies of natural resources.  What can’t be overlooked is the sheer volume of R&D and not to mention budgets that global manufacturers are putting into these projects that we will all embrace…one day.  I-technology and motor technology are merging more and more so much so that we should feel fortunate to be a part of the generation that changes, shapes or at least witnesses the future of transport.  Electric machinery will take over; the question is when?

Battery technology is advancing, range is getting longer, charging points are becoming more widely available and appropriate noise solutions are being developed yet it could be argued that the main city traffic issue is congestion rather than pollution.  If that is the case then why wouldn’t we all be darting around town on electric bikes – the solution to both problems.

So, when Bike Social spoke to Livia Cevolini, CEO of Energica – the manufacturer of the first Italian Electric Superbike - we were enthralled to hear the passion behind the brand: 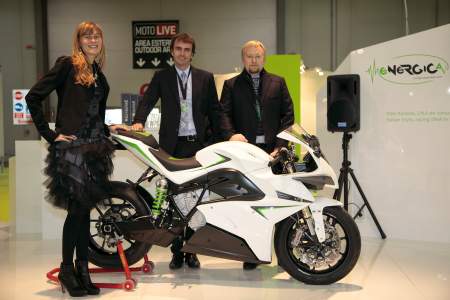 Bike Social:
You unveiled the EGO at the Milan show last year and told us that running bikes will be ready to test in the summer of 2013 – how has the development and test process been since last year?

Livia Cevolini, CEO Energica:
We started the road testing in June 2013 according to our Gantt schedule. In particular the EGO was shown for the first time during a Renault event at Circuit of Modena on the 3rd of June. Since then we made thousands of kilometres on roads on the Proto Zero to test several different features, and we defined updates and improvements.  And now we are preparing the first 2 Proto’s, one for EICMA show. The Proto One is the improvement of Proto Zero, according to the first road testing, and is very similar to the final production version, that will only improve from industrialization point of view.

BS: The price point for the EGO has been mentioned in the press at around $25,000, is this accurate or even confirmed yet?

LC: We are working on that with suppliers too, so it is difficult to fix a number when the main feature, the batteries, changes the market price month by month. But we are thinking more and more at that number.

BS: Is there a specific release date for the EGO and do you have distributors in the UK? What are your forecasted sales in Year 1?

LC: There is a specific period of the year for SOP (Start of Production) that is beginning of 2015. The exact date will be fixed during 2014. We are already starting to sign agreements for USA resellers, whilst Europe is taking more time. The next year will be used mainly for this purpose too.

We want to be very conservative and pragmatic, so we are thinking of a fair 500 worldwide…

BS: Are the bikes made in Italy at your factory?

LC: We are willing to remain in Italy for the main part of the development. Italy is a great country for 2 wheelers: we have the best suppliers and the best engineers, coming from a long and strong tradition according to the main players such as Ducati, Aprilia, MV Agusta, and so on.

BS: Will you making bikes to order?

LC: Production to order is not sustainable from economic point of view, unless for very luxury and limited editions.  It is not the time for big production anymore.  Therefore we are looking for the best balance.

BS: Where did the original decision come from to make an electric superbike when global sales of superbikes are in decline?

LC: Exactly for that reason!  Sports bikes are THE motorbike, it’s all about passion and strong feelings.   Electric is not competitive from price point of view now, so the only way to compete is on strong emotions.

EGO is absolutely competitive from that point of view, and every single rider who was so lucky to ride it can confirm this.  And it is electric.  Electric powerful vehicles combine the new technology fashion and the “old” love for speed.

BS: Who do you see as your competitors, are they the other manufacturers of electric bikes or are all superbike models now your competition?

LC: I guess that the main competitors for all of us are…smartphones! And everything about connectivity. We just need to combine the best of the two technology and worlds, the I-technology and the motors technology, and it’s a done deal!

BS: The bike looks stunning, where did the inspiration come from for the design?

LC: Well, 44 years in F1 taught us something, not only from technology point of view.
And we are Italians…this is something that no one can steal us: a sense of beauty.

BS: Many people do not like the idea of a quiet motorcycle but your bike is not quiet, how was this developed?

LC: Well, we worked a lot on this. I remember very well when we were thinking of this problem with my brother and my father. We come from the beautiful song of a V12…and no sound meant no passion! Then my brother thought of the straight gears, as in F1, that have this very strong and high whistle…and we understood it was a great idea!

BS: News reports state a range of less than 100 miles per battery charge on the prototype model, is this something that will be developed and increased before the EGO goes into production or will you be looking to offer an upgraded battery pack in the future?

LC: Well, battery technology is improving very fast, so we will be very happy to adopt new technology as soon as it will be safe and reliable enough. But it is absolutely impossible just to make a bigger battery pack.
First of all for homologation, because it would be a second complete homologation, and it would be a cost too high to be sustainable from economic, and timing, point of view, even if there is someone that is claiming it…
Second point is the rideability: we worked a lot on it too, and the riders were amazed from EGO maturity and easy riding. This is a sportbike, not a van!  The rider has too feel the same pleasure at riding EGO exactly as any other petrol bike, or at least very similar.  Now it is well balanced and we want to keep it as it is.
Actually the range will be more than 100miles (160km).  So far we did more than 150km at high “mountain” riding. It means lot more at quite “city” riding. And even more with the “eco” map.  This range is the same of any petrol sportbike.  Fast charging is already implemented on EGO and will be a possible option with the first release.  Therefore the real deal is to push to have more DC stations, and not more weight and cost on the motorbike!

BS: Do you have any intention to race the EGO in the TTXGP series and at the Isle of Man TT?

LC: We will never race at the IOM until I will be there… I love that race, but I love more my riders.  TTXGP and eRoadRacing will be nice when the visibility and return on investment will be worth to join.  We come from races, our hearts are there…

LC: We are working on that too, the final list will be realised in EICMA Milan in few weeks. By the way 99% will be what you see.

BS: The EVA model has been described as the naked version of the EGO, what information can you give us before EICMA?  Will it be officially unveiled at the show?

LC: No, EVA is a project very close to EGO but will not be disclosed until next year. I could tell more…but then I should kill you!

At the risk of pushing our luck and being faced with the Italian i-mafia we asked no further questions.  The project has given us a glimpse into the future of motorcycling technology and we shall certainly be paying more attention to the TT Zero race in the Isle of Man in June where the bikes are developing year-on-year at an extraordinary rate of knots.

During the 2013 race the leading two bikes lapped at an average speed of almost 110mph, a 13mph increase from the 2010 race which means that we could see the electric bikes matching the speeds, if not the range, of the current Senior TT superbikes within 4-5 years.

Tomorrow is coming whether we like it or not.