Bennetts searches for the next British racing star

Are you the next British motorcycle racing superstar destined for MotoGP?  Then Bennetts wants to hear from you.

Bennetts has a lengthy history of supporting British motorcycle racing including the Isle of Man TT, Classic TT, British Superbikes, Neil Hodgson, James Toseland and most recently Cal Crutchlow, Scott Redding and Joe Franics.  The UK’s No.1 for Bike Insurance is now on the look-out for the next motorcycle racing superstar with a sponsorship package for 2014 ready and waiting for the most eligible.

Current Moto2 World Championship leader Scott Redding has been sponsored by Bennetts for three seasons and are in fact his only British sponsor.  The three-time Moto2 race winner has been leading the Championship for the majority of the season but faces tough competition from Pol Espargaro and Esteve Rabat in the final few races.  If Scott takes the title, he’ll be the first British rider to win a Grand Prix title since Barry Sheene 36 years ago. 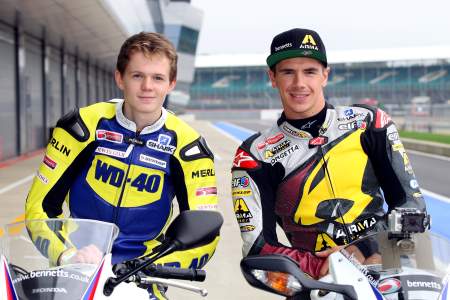 The 20-year old from Gloucestershire has been involved in Grand Prix racing – both 125cc and Moto2 - since the age of 15 and this incredibly talented young man has already confirmed his step up the pinnacle of the sport, MotoGP, having signed a 2-year deal with Gresini Honda back in August.

Backing the campaign, Scott said, “I’ve been backed by Bennetts for three years so if you think you’ve got what it takes then now’s the time to get in touch.”

Joe Francis who turns 16 in November has just wrapped up the British Moto 3 Championship with one round to spare.  This is already the 8th title of his short career and he did so by finishing every round bar one on the podium.  However, his career very nearly ended before it began; Joe’s mum Sharon got in touch with Bennetts in 2011 when her son was leading the Aprilia Superteen Championship although they were struggling to find the financial resources required to complete the season.  Sharon wrote to Bennetts Biking Dreams and the insurance broker stepped in to help enabling Joe to win the championship before making the step up into the British 125cc series.

Both Scott and Joe are evidence of the fantastic talent that Britain is producing yet some of these young men are simply not getting the backing or opportunities to have their talent recognised.  36 years since a grand prix champion is far too long.

Joe and Scott recently spent the day at Silverstone with several members of the media to promote the Bennetts Grass Roots campaign, here's how they got on:

So, if you or your son or daughter has what it takes then get in touch with Bennetts.  Email grassroots@bennetts.co.uk detailing your racing history, 2014 plans, career objectives and sponsorship requirements for the 2014 season.