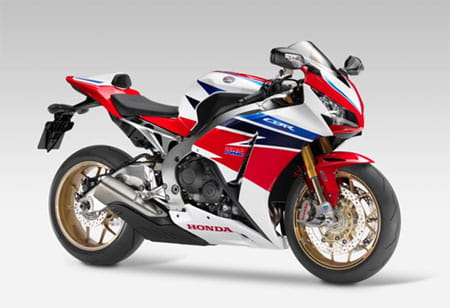 For the last year, rumours have been flying around at quite some pace about Honda releasing the next generation of their Fireblade during the 2014 show season. It soon became clear this wouldn’t be the case, as Honda put out a release to state while there may well be a new V4 Super Sport model in the making, it certainly won’t be seen this year.

They weren’t lying either. Honda are about to unveil the upgraded 2014 Fireblade ahead of the Milan show and as you’ll see, it’s not all that different to the Fireblade we’ve seen in the last few years. However, there is one massive change for 2014: For the first time ever, there will be two versions of the most iconic sports bike over the last twenty years – an upgraded 2014 ‘standard’ model and an all-singing, all dancing, track-focussed CBR1000RR Fireblade SP.

The standard model is relatively unchanged for 2014, with the die-cast twin-spar aluminium frame, 43mm inverted Showa Big Piston Forks and rear shock remaining the same as the previous model. The main area of upgrade for 2014 is the 999cc four-cylinder engine, which has received “extensive work” on the cylinder head to improve inlet and exhaust gas flow and combustion efficiency. Honda claim the result is an extra 2kW peak power and improved mid-range torque. The riding position has also been slightly altered, with revised handlebar and foot-peg positions. 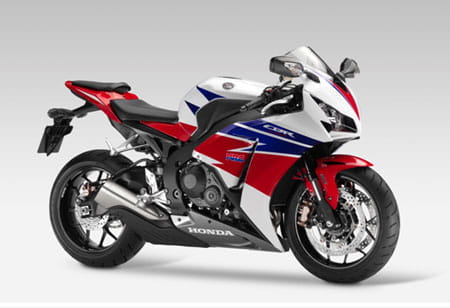 The standard 2014 CBR1000RR will be available in the HRC tricolour (Ross White), Graphite black and Pearl Glare white.

The 2014 CBR1000RR Fireblade SP is the first of its kind, being introduced to meet demand of hard-core performance enthusiasts. Honda describe the machine as “a track-focused, yet fully road legal machine, that not only looks special – it is special”. And they really aren’t joking… the SP comes with circuit-ready front and rear Ohlins suspension plus Brembo four-piston mono block calipers, with frame revisions and new top and bottom yokes to suit. The 999.8cc inline four-cylinder engine gets the same updated cylinder head as the standard blade, but also features factory-matched pistons and con-rods. 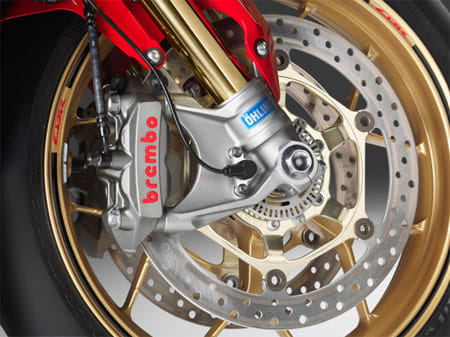 To stand out from the standard model, the SP has its own unique tricolour paint scheme – white and two-tone blue with a central red stripe and the stunning, trademark Honda gold wheels.

Honda’s electronic Combined Anti-lock Brake System as used by the Honda TT Legends team in the Endurance World Championship is available on both standard and SP models.