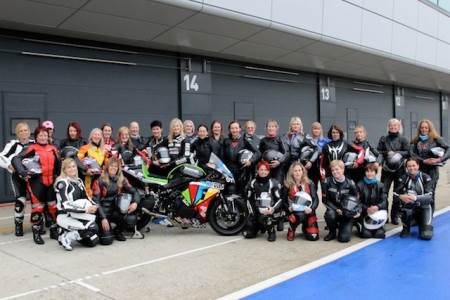 Maria Costello has announced the dates for two more women only track days in 2014 following the success of the events held by the road racer earlier this year.

Silverstone will once again play host to the women-only events which are scheduled for 10th April and 9th September 2014 with bookings open already. Costello’s first Silverstone Women Only track day took place on 3rd October and saw a great turn out for an enjoyable day.

“I couldn’t have been more pleased with how the first Silverstone women only track day that I hosted back in October was received” explained Costello.

“I was overwhelmed by the positive feedback from both the circuit and all who attended. So it’s great to announce two new dates for 2014 and give another two opportunities to those that missed the chance to come along. I also hope to see some of the same faces again too.”

The 2014 events are to be held on Silverstone’s Stowe circuit, cost £199 per rider and can be booked here. Costello has been working to get more women on motorcycles over the past few years, organising meet-ups, ride outs and more. Further track days at Teeside Autodrome will be announced in due course.

“My Woman on a Motorcycle (WOAM) Facebook group has grown rapidly in recent months and it’s a great sounding board to see what women really want. The recurring theme appears to be the chance to take to the track and improve their riding skills in a controlled environment with instruction from yours truly" added Maria.

"Not all women are comfortable with a traditional style track day, as some find it intimidating, so holding women only days means those ladies have an opportunity to do something that they wouldn’t otherwise have tried. Anything that helps women get out on their bikes can only be good for motorcycling in general, so I’m looking forward to these opportunities for me and my team to provide guidance and tuition, both on and off the track" the road racing star concluded. 7