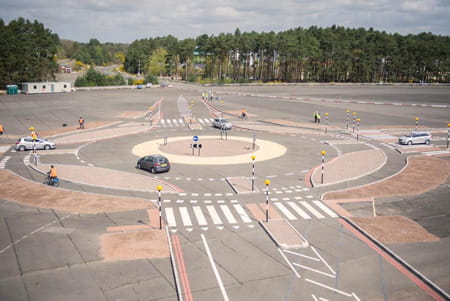 Over the next ten years, £913 million has been earmarked to transform the UK capital to make it more cycle friendly and Transport for London (TfL) is recruiting motorcyclists to take part in road safety research, in order to make sure improvements also benefit them.

Trials of ‘Dutch style’ roundabouts and low level signalling are currently being carried out in Wokingham, to assess their suitability for introduction on UK roads. Apparently, these roundabouts have a tighter geometry which reduces vehicles’ speeds and improves visibility, and some have an orbital cycle lane which allows cyclists to travel around the roundabout separately to other traffic. They could be introduced in London as early as next year.

Although this particular research is aimed at boosting cycle safety, TfL are clear that the impact on motorcyclists will be a key consideration.

“Cycling is not always an option for those commuting longer distances and therefore motorcycling needs to be factored into a two-wheel vision for London,” says Steve Kenward CEO of the Motorcycle Industry Association (MCI).  “Cyclists and motorcyclists have a good deal in common as vulnerable road users and any measures which improve the safety outcomes for all two-wheel riders would be welcomed by the MCI.”

“The areas we would be concerned about are whether a tighter geometry at roundabouts results in motorcyclists being squeezed out by cars and lorries and whether tighter turning traffic results in more diesel spillages, which would be a problem for motorcyclists,” adds Karen Cole, Safety Director for the MCI. “Also whether a motorcyclist giving way to a cyclist and effectively stopping mid island could then be rammed by the vehicle behind."

If you're a motorcyclist aged 25 or over and are interested in taking part in the road safety research, simply apply online.