From Zero to hero! 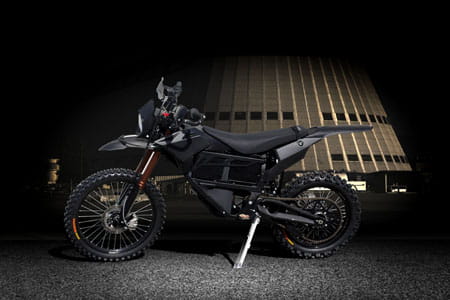 American brand Zero Motorcycles, regarded by some as the global leader in the electric motorcycle industry, took the top place in a recent competition to become ‘European e-Motorbike of the Year 2013’ at Europe’s Clean Week 2020 elections for the third year in succession.

Now while most manufacturers would be overjoyed with winning such an accolade, the thing that has really got them fired up is their new 2013 Zero MMX military motorcycle, which has already been approved for stringent testing with the US military. No surprise in some ways when you find out that the bike was actually developed exclusively for the U.S. Special Operations Forces (SOF) to provide them with tactical advantages when compared to one powered by a conventional engine, such as a lower heat signature.

Based on their MX civilian bike the new model obviously has a number of special features including a special dashboard, keyless ignition, a switchable headlight for stealth operations and integrated wiring to take infra-red systems. It too now has modular and easily exchangeable power packs that can be changed in under a minute and these can be recharged in under an hour, but also a reserve capability when things get tough and extra range is required.

Probably though one of the most interesting features is its ability to run when submerged in water to the depth of one metre, disproving the saying that water and electricity do not mix!

The MMX is powered by their new Z-Force™ motor giving 54 hp and 68 ft-lbs of torque, as well as incorporating regenerative braking to both modulate speed and extend battery life.  Performance characteristics are adjustable via Bluetooth devices loaded with the Zero Motorcycles mobile app.

Abe Askenazi, Chief Technology Officer for Zero Motorcycles said at the launch, that lessons learnt and the new technology would be incorporated into all civilian motorcycles where applicable so that they would all now be ‘military grade’!