Charley Boorman's Blog: How to pack for a big adventure 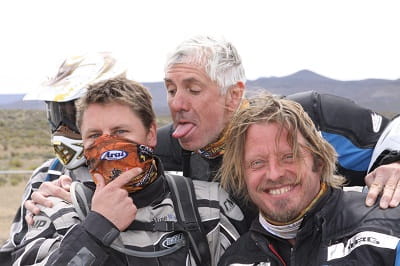 This month Charley tells us how to pack for a big adventure, and shares a hilarious tales about when it all goes wrong! Read Charley Boorman’s exclusive blog and see more pictures every month on Bike Social!

Go to any major city, like London for example, and you can hardly go anywhere without seeing an adventure bike – they’re absolutely everywhere.

The rise and rise of Adventure themed bikes is phenomenal. Some would say it’s at the demise of sports bikes – but hey, I’m not complaining.

Just look at most of the monthly magazine covers – ‘Triumph versus BMW’ – ‘Multistrada versus KTM’. Honda, Suzuki, Yamaha – every major manufacturer is in the adventure touring game now.

Most of these bikes are BIG, like my beloved BMW GS Adventure, but some commentators reckon they’re too big – and heavy, and we’re all signing up for oversized, overweight and over priced brands.

Well, you know my view is to ride what you want, what you can afford and what feels good. I’m lucky enough to have a few bikes, big and small – and I ride them all as much as I can. I like the whole idea that we’re a certain breed of people – ‘bikers’. I travel the world a fair bit and the whole ‘Bike’ thing just crosses boundaries, cultures, languages and even ‘class’ – if that’s still a category! The idea of sports bikes being a ‘separate’ group from say cruisers or even Adventure bikes just annoys me. I wave at anything on two wheels and I’m always a little miffed if I don’t get a wave back – which is not that often, especially when travelling far afield.

So, I thought I’d write this column about Adventure riding – but in particular ‘packing’. Or more precisely over packing!  We’re all guilty of it.

How many times do you look back at the suitcase after returning from a holiday and realise that you’ve never even worn that Tee Shirt or those shorts, trousers or socks? It’s amazing how we all have a tendency to bring too much with us when we leave our home base. This month I’m looking at how we pack the bike and how it can lead to problems, big problems!

Travelling light is the Holy Grail in my opinion. You’ll always have a tendency to pack too much, but you have to fight it, so here’s some of my top tips:

Spread it all out on the floor, review and revise several times. I often take a picture of the pack spread out on the floor, all neat and tidy. Being dyslexic, the picture is of more use to me than a written list and I can review previous packs visually and it helps me slim things down even more.

My god, when I look back at the initial pack on Long Way Round – blimey! It was just ridiculous. I suppose it reflected our naivety and nervousness before that first epic ride. I actually dropped the bike twice, at the start and when we were filling up with petrol just around the corner – the bike was so out of kilter, so overladen.

The bike won’t handle the same as when you’re ‘naked’ so make sure you can enjoy the ride by dumping any unnecessary stuff – though keep your undies on!
If you do have a support vehicle, dump 95% of your stuff into it. Just carry some basic tools and clean shorts / Tee shirt / Flip-flops, for when you get to your next camp / hotel stop – in case you get there before the support.

We couldn’t do that in Long Way, but we certainly do on our annual African and Australian adventure rides. If the support vehicle is delayed for some reason, like a break down etc., you can still change out of the heavy hot dusty bike gear into shorts and have a beer at the pool… nice!

Of course, you don’t always have the luxury of a support vehicle. But where possible the advice is still ‘go light.  In particular, avoid tying on all sorts of gear to the back of your bike. The more straps and bungees you have on the bike, the more you increase the chances of something coming loose, dangling into your wheel and instigating a ‘bottom clinching moment’.

Use good well designed kit, like tank bags and tail packs. Stuff that’s been tried n tested on your model of bike is less likely to cause a problem – but again, don’t over do it. I always have a little concerned shudder when I watch a guy getting on board his grossly overladen GS. With all the baggage on the back piled high and his tank bag leaving him just a small ‘slot’ to climb into.  Then with his boots and adventure riding suit it can be a real challenge just cocking ya leg over, requiring the agility of an Irish dancer and some serious circus skills.

Remember too that once loaded, you need to consider the weight distribution and tyre pressures. No point having all the weight on the back carrier – causing the steering to be light and flighty.

Spread the weight out by getting a tank bag or crash bar bags and check out what the ‘loaded’ recommended tyre pressures are for your model – we often underestimate the importance of tyre pressures. Ask a road racer about them – and about what difference 1 or 2 psi can make to a result!

Finally, you may want to adjust your suspension – whether it’s electronic or twist n turn, you’ll likely want to stiffen it up a bit (ooh er missus!). Check your manual or dealer to get some recommended suspension adjustments. On the GS with the electronic suspension adjustment, you can experiment with different settings and see how the bike handles. I often play around with the ESA depending on a whole host of things – particularly the track, how sandy, how rocky – if it’s predominantly up hill, down hill etc.

DON’T TRY THIS AT HOME
Billy Ward produces my touring theatre show ‘An Evening with Charley Boorman’ – some of you may know him as ‘Biketruck’ as he used to truck a load of bikes to North Africa. The show is like a chat show style evening and we’ve toured it around the UK a couple of times – it maybe coming to a town near you next year – so keep ya eyes peeled.

Anyway, Billy’s also a guide on my adventure trips and a pretty experienced adventure rider and traveller.  On the trips he’s forever going around clients’ bikes before a big ride advising them to remove excess from the bikes and dump it into the support vehicle. He’s obsessive about it – if anything, he becomes a bit of a pain in the backside, each day reminding people.

But one hot day in Namibia last year, riding along fast gravel tracks, he took his brand new Touratech puffer jacket off and strapped it with bungees to the rear carrier. The Skeleton coast can be chilly in the early mornings with the Atlantic sea fret rolling into the land mass. But, as you get further inland, the desert wins over the sea and everything heats up – big time, within just a few kilometers.

Billy was happily playing ‘Tail end Charley’ – if you excuse the pun, about thirty minutes behind the last rider, cruising at around 140kph up on the pegs thinking he’s a Dakar god, when his dream was broken.

Without warning his back wheel locked up completely.

Unfortunately this happened on one of the few bends in that stretch of the track. His first thoughts were ‘…shit, the engines seized…’ – so pulling the clutch in, while snaking along at a slightly reduced speed of a mere 130kph seemed to be a good course of action. He was wrong. The clutch made no difference, and the bike continued to slew left and right as he did his best to fight the tank slapping and stay on.

An arm of the Touratech jacket had escaped out of the bungees grip, due to the perpetual vibrations of the corrugated track and dangled down into the spinning roulette wheel – disaster. 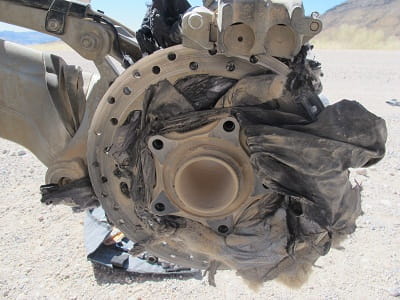 His extended rear wheel skid reminded him of the fun he’d had doing this very exercise at the Simon Pavey Off Road school in South Wales! But this time it was for real, in top gear and at pretty bottom clinching speeds. Fighting with the bike as it skidded along, he told me his thoughts went to ‘which hospital’ he’d probably end up in later and whether he could continue the trip with his injuries or would he have to bail out on his repatriation insurance back to Blighty! It is amazing what you can think about in those few seconds of impending disaster…

He was lucky. He continued the struggle and instead of finally being catapulted through the air (which he was expecting), he finally came to a stop. The air was thick with the smell of smoldering plastic and burning rubber (and hot underpants!).

The skid measured 168 metres and the brand new expensive jacket had literally welded itself into the brake caliper and wheel hub – oh and the brake fluid boiled. The tyre wasn’t looking too good either, now with a new right-angled edge ruining the previous traditionally round design.

With the support vehicle about 20 minutes behind him, he was a desperate man trying to remove the evidence and fix the bike before it caught up. He knew that Johnny Maroc, who was piloting the support truck (our partner and chief guide) would have no mercy with such an ‘own fault’ incident.

Johnny is not renowned for sympathy at the best of times, but with Billy’s obsessive barking on to the clients about kit – and now a prime example – Billy knew it wasn’t going to be fun if this went public.

Two hours later, surrounded by tools and hundreds of tiny bits of jacket, Billy had sheepishly passed over the job to Johnny. The heat of the Namib Desert asserted it’s own unique pressure, but eventually all looked well… except for the jacket of course. They had to remove the wheel and brake caliper and even then it was a millimeter-by-millimeter job of extracting layer upon layer of molded plastic and nylon.

Billy continued on after suffering the wrath of Johnny for some time. But really we were all pretty pleased with the result. No injury, a fully functioning bike, no clients to witness Billy’s novice error and a big lesson underlined – avoid strapping anything to your bike, but if you have to, make doubly sure it’s secure. Don’t let it be your undoing – in more ways than one.

Read Boorman's blog and have a look at more exclusive pictures from Charley's trips, rides and adventures.