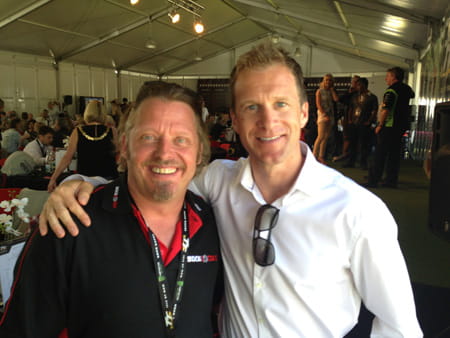 We recently asked fans of our Facebook page and our Twitter followers to submit their questions to world traveller and all-round bike nut Charley Boorman. We caught up with him at the Isle of Man TT and here’s what he had to say…

Steven Richardson: After travelling so much around the world and riding in over 100 countries, what is your favourite piece of road for riding on, for off-road or sealed twisty stuff?

“I suppose out of all of them the one that stands out the most is the ‘Road of Bones’ as one of the big highlights of my life.  It’s both off and on-road!  One of the best pieces of tarmac in my opinion is through Tasmania, particularly Hobart to Strahan, one of the best twisty roads. The tourist strap-line should be: ‘Tasmania - no straight bits!’”

Andy Nicholson: Why not do South America to Canada?

“Oh, a Long Way Up! Ewan and I have spoken about doing a third one so you never know.  We’re both so busy but there’s plenty of time to do another.”

@JohnTarbet71: You've travelled around the world, what one thing do you always take with you?

“Baby wipes!  Especially with camping a lot, you never want a rashy bum when riding a bike!”

And we had some questions of our own…

What challenges around the world do you still want to take on?

“Wow, there are too many to write on paper!  But if we could ride around the ‘Stans’ i.e. Pakistan, Uzbekistan, Afghanistan and make a TV show that would be awesome.”

You’ve visited many countries, is there one that stands out as being your favourite?

“An impossible question to answer. There are so many ‘slap your face’ moments as I call them.  I recall one in Tanzania when Ewan and I rode over a crest at dusk looking for a place to camp.  The sunset was blood red and ahead of us were 40 elephants crossing the road…an incredible moment.”

Apart from Ewan Mcgregor who would you next like to do a long ride with, given the opportunity?

“Ted Simon, a British journalist who has circumnavigated the world on a bike not once but twice.  He is one of Ewan and my greatest inspirations to do long rides.”

How would you encourage someone to get into bikes?

“You’ve got to explain the benefits of riding, even if it’s just back and forth to work, it’s a fantastic way to commute and save time.  The freedom and being able to unwind by sitting on a bike.  Biking’s very social, you can create a tremendous amount of friends.  Then there’s riding through South Africa, to be honest if a couple of actors can do it then anyone can!”

Did you enjoy the TT?

“Every year seems to be a magical year but this one was Michael Dunlop’s year.  A new star was born.  You can try and describe how wonderful the TT is but you have to actually go to truly understand.”

To see what else Charley has been up to this month, don’t miss his exclusive bikesocial.co.uk blog.