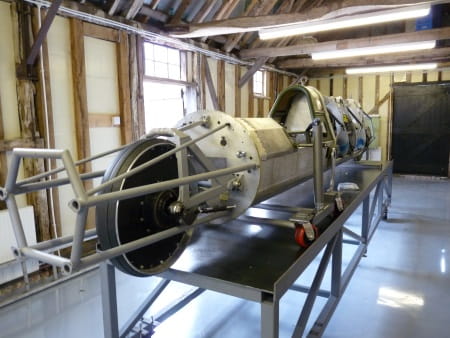 As revealed by BikeSocial in December, double World Superbike champion James Toseland is to attempt to beat the official FIM motorcycle land speed record, aiming for speeds of 400mph and over.

The attempt is scheduled for September 2014 and will take place at the Bonneville Salt Flats in the US and the motorcycle streamliner Toseland will pilot has been in development for some time. In two weeks time the work-in-progress machine will be displayed at Goodwood Festival of Speed.  We recently caught up with a key figure from the project, Jim Brown to see how they are getting on.

“The Rob North built chassis is rolling and preparations are underway to take it to the Goodwood Festival of Speed where it will be part of a major Land Speed Record exhibit. JDClassics are preparing and painting a set of display body panels to be fitted to the streamliner, though the side panels will be removed to show the engine.”

“The chassis has been laser–scanned by 3D engineers and then CAD (Computer Aided Design) modelled by students at the University of Derby as part of their research for MSc courses in Motorsport Engineering. They’re currently wind tunnel testing a 6th scale model with Coventry University to correlate the CFD generated design. Ron Ayers (Aerodynamicist for Thrust SSC, the JCB Dieselmax  & Bloodhound SSC) has reviewed their work and provided additional guidance.”

“The final shape will be ready at the end of September. We are currently talking with companies about making the carbon composite bodywork – once we have the final shape and confirmation of the split lines.”

“Bernie Toleman has reworked the front suspension to take either solid or pneumatic front tyres. Getting suspension movement aligned with the very low ride height is obviously important. It has been fitted with Ohlins units which will also be used at the rear.”

“The bike already has a pair of solid slave wheels (which will be used for Goodwood) but the final design will use 500mph rated Mickey Thompson pneumatic LSR tyres at the rear. At the front, no 500mph rated tyre of the size we need is available so a machined solid wheel is the default option. However, we’re working with Cambridge University Department of Engineering and a major manufacturer of roller coaster wheels on the design for a cast and bonded polyurethane tyre. Clearly this technology is tested extensively since roller coasters carry passengers – but not at the speeds we intend to reach. We also need to know what happens if we run over at stone at 450mph.”

“A revised and beefed up rear swing-arm is being made with carbon shrouds which will encase the Kevlar drive belts to keep debris away from the pulleys – one either side of the rear wheel.”

“We have two 1,000shp Rolls-Royce Gem gas turbine engines, one of which has now been subjected to a major rebuild and inspection program and fits nicely in the monocoque chassis along with the Graham Sykes designed and built transmission and transfer boxes. The spare will be used for shows and then rebuilt as an operating spare for the duration of the record attempts.

“The Life Racing on-board data-logger has been spec’d by Roger Ratley and integrated with his overall system and wiring design. Mike Tickner from HCI is handling the wiring while TE Connectivity are providing all the aerospace standard connectors. The displays are fully programmable and integrated with the dozen of sensors monitoring the vehicle. Roger has chatted with James about what controls & displays he eventually wants in the cockpit.”

“Advanced Fuel Systems have agreed to provide a specially designed fuel cell which will be to full aerospace standards. They have done the same for ThrustSSC and BloodhoundSSC so are a great partner to have. Last but not least, Alistair Smith is hard at work on the final design for the pneumatically operated stabilisers that are retracted once James is under way and then deployed once he’s slowed down. The design couldn’t be finalised until the CFD work for the air intake dictated how much space was available.”

“As ever, there are many other areas yet to be worked on but that’s the nature of building a prototype that is also the final vehicle.”