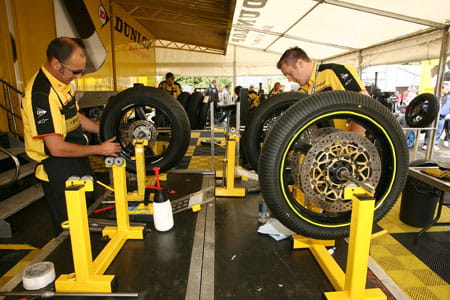 With the Isle of Man TT dominating the headlines recently, it is easy to miss the fact that Dunlop, who were the official tyre partner to the TT, are celebrating their 125th birthday this year.  The original company started in 1889, when Dunlop Pneumatic Tyre Co. Ltd was formed in Dublin as result of John Boyd Dunlop having taken out patents on the pneumatic tyre.

Production began in late 1890 in Belfast, and by the mid 1890’s Dunlop Tyre as the company was now known had established divisions in Europe and North America. In 1902 it had its own manufacturing subsidiary called the Dunlop Rubber Co. Ltd, located in Birmingham which eventually expanded into a new building known as Fort Dunlop due to its appearance.

The company went through a series of mixed fortunes over the years and is now owned by the Goodyear Tire and Rubber Company with Fort Dunlop sold and now just a hotel and shopping centre next to the M6 motorway.

Despite their ups and downs the company have been prominent in motorcycle racing and have always been associated with the TT races. As a result this year they took 1,500 tyres on two 40-foot trucks, complete with dedicated support teams for their sponsored riders which included TT legend John McGuiness amongst the 70 who use the product.

The support is not just about advertising, as the world’s most demanding road race creates stresses and strains on tyres not found at any race track and Dunlop get a lot of information on tyre design and wear characteristics.

As a result of last year’s TT success, Dunlop launched the new Sportmax D212 GP Pro this year which benefits from their Multi-Tread (MT) and Jointless Tread (JLT) technologies and advanced NTEC system.

Dunlop clearly knows that “racing really does improve the breed” and leads to continued birthday celebrations.