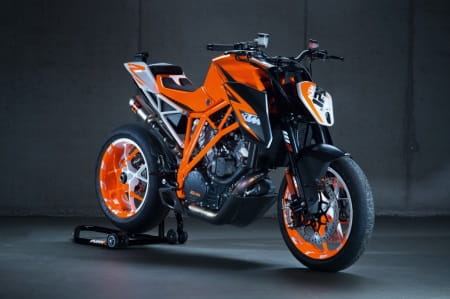 Jeremy McWilliams is set to ride the KTM 1290 Superduke R prototype in its first public run this weekend at the 20th Goodwood Festival of Speed.

The concept machine, dubbed ‘The Beast’ is powered by a liquid-cooled V-twin engine based on the RC8 R Superbike but KTM are cagey with further details – not releasing figures for power or top speed. Around the two-cylinder engine the developers fitted a tight suit tailored from light steel pipes, completing the frame with a single-sided swing arm and top level prototype development suspension components from WP Suspension. The chassis is completed with lightweight wheels, racing brakes and racing tyres.

“It’s always an honour to ride at Goodwood, but to be honest this will be the most insane bike I’ve ever ridden and yes – more than a certain MotoGP bike. Hopefully I can keep ‘The Beast’ on a leash and put on a good show for the fans at Goodwood. It is going to be memorable!” said the former 250GP winner.

KTM will also be in attendance on four wheels with another UK first, as the recently unveiled KTM X-Bow GT will be trying to beat the official record of 41.6 seconds.