Much of the post-2013 Pikes Peak International Hill Climb news has revolved around the new record set by rally driver extraordinaire, Sebastien Loeb.  However, in the two-wheeled world, motorcycling history was made as the Lighting SuperBike, piloted by Californian Carlin Dunne, beat the competition which included a Ducati Multistrada 1200s by over 20 seconds to take victory in the motorcycle category. 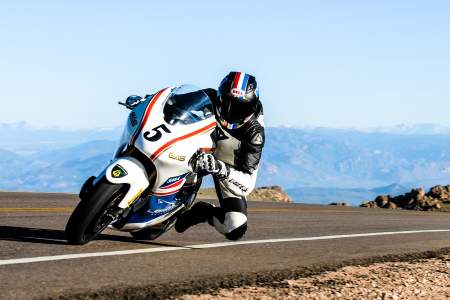 “In hindsight, you’re always like, ‘I could have gone a little further here or a little faster here,’” Dunne said. “But today, that’s all there was on this course. It was a little slick, and I think everyone had grip problems. I realized that about six turns in when I almost completely pitched it.

“At that point, I said, ‘Be mellow, and let’s make it to the top.’ Ten minutes on an electric bike – that’s incredible. We made history today, and I’m really happy.”

This was the 91st running of the event and who would have thought that back in 1916 when Spencer Penrose promoted the very first running of the famous event that an electric bike would beat its competition fair and square?

With average speeds in the Isle of Man TT Zero race increasing at a strong rate year-on-year, will we be looking at the TT Zero taking precedence over the Senior TT by 2020?