Believe it or not, since its launch in 2004, BMW have sold a massive 180,000 R1200GS models all over the world. Every year over 25,000 GSs roll off the production line, a figure that equates to 25% of BMW’s total motorcycle production. So to say the GS is important to BMW would be something of an understatement… 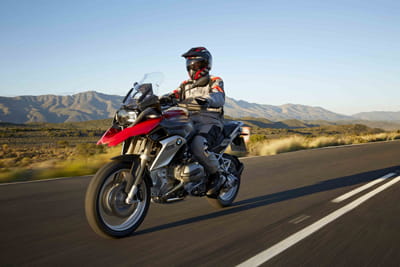 With this in mind, you can image in the stress involved when it comes to redesigning the whole bike? Well that’s what BMW have done this year as the 2013 GS is a ground up new model with virtually no components shared with the current bike.

While the chassis, wheels, brakes, look etc are new, the thing that is causing the most interest is the Boxer engine, which for the first time in its 90-year history has gained liquid cooling. Sort of. Where the old Boxer engine was 22% oil cooled, 78% air cooled, the new motor is 35% liquid cooled and 65% air cooled. So it is still mainly an air cooled twin, it just has what BMW call ‘precision cooling’, targeted water cooling in high thermal stress areas. Internally the motor is also redesigned with a lighter crank, slipper clutch, vertical through-flow and ride-by-wire electronics for the first time. 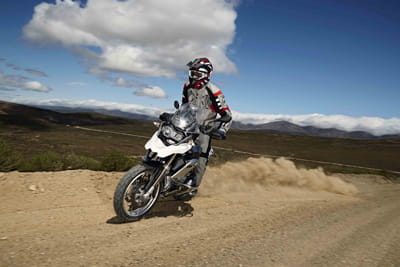 As you would expect, the engine dominates the feel of the new bike. Even from tickover you can instantly tell the new GS has a different power plant to the current model’s as the traditional side to side motion when you blip the throttle is virtually gone. There is still a bit of sway due to the rotation of the crank, but it is greatly reduced and the motor also feels and sounds far quicker revving as if it has lighter internals, which is exactly what it does have. Something you can tell when you ride it.

Pull the extremely light clutch in and with a click from the vastly improved gearbox you are away, which is where the new GS is shows how advanced it is. 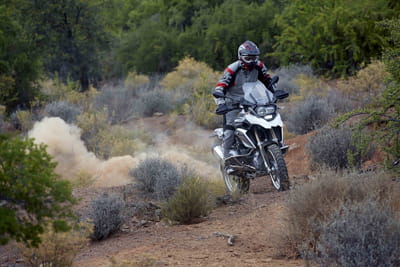 The new engine feels and responds with the same characteristic sound and drive of torque as the old bike, however it does it with much more urgency. The power increase from 108bhp to 125bhp with the torque up from 88lb.ft to 92ft.lb is instantly apparent yet never overwhelming. It retains the old feel of the GS motor, just sticks it on steroids! If, however, this is a bit too much for you the new power models (Rain, Road, Dynamic and Enduro) alter not only the throttle’s response, but also the excellent traction control and ABS systems.

Impressive as the engine is, the real surprise comes from the chassis. There was a time when you had to make compromises with big trailies and accept they may be a little uncertain in corners, with the new GS this is no longer the case. BMW have equipped the GS with wider wheels and tyres (120/70 from 110/80 on the front and 170/60 from 150/70 on the rear) as well as new Metzeler Tourance tyres.

This move, along with the altered chassis and longer swingarm, have transformed the GS’s handling. It’s now as surefooted as you could ever want in the bends with the semi-active suspension doing its thing below without you even spotting it.

The 2012 BMW R1200GS is a fantastic machine with a thoroughly deserved reputation, the 2013 bike takes this base an improves on it by adding a giant leap forward when it comes to technology and handling. It’s going to be a sure fire winner in the showrooms and is a worthy way for the GS to enter its new (kind of) water-cooled generation…